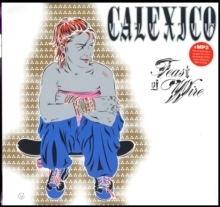 The stellar 2002 album that saw Calexico move into a minefield entirely of their own. It got them tagged the "Tex-Mex Radiohead" and sold in the hundreds of thousands.

It contains songs as dramatically different as "Sunken Waltz" alongside the dark, bleak crescendo of "Black Heart". This reissue features all the bonus tracks and remixes and album outtakes that stem from the time of its original release. Nine bonus tracks altogether compiled into one beautiful 'package'.