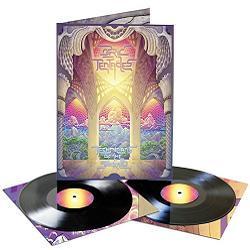 Technicians Of The Sacred is the first all-new Ozric Tentacles album since 2011's Paper Monkeys (and their first double album since their classic Erpland release of 1990), and comprises eleven tracks, with over ninety minutes of music. Tracks such as Switchback, Rubbing Shoulders With The Infinite and Butterfly Garden are brilliant examples of the Ozrics musical art; pulsating rhythms and blissed-out tunefulness present and correct. The band are to undertake a twenty-four date European tour in late April and May 2015, including twelve UK shows to promote the much-anticipated release of Technicians of the Sacred, with further gigs in the USA to follow.

Ozric Tentacles first came together at the Stonehenge Free Festival in 1983, and built an audience through selling privately produced cassettes of their music. Their talent for hypnotic, mantra-like grooves found kindred spirits in the British rave scene of the late 1980s, uniting the seemingly disparate 'New Age' hippie and Rave audiences. Despite the lack of a hit single, media notoriety or the usual music business hype, much less major-label backing, their 1993 album Jurassic Shift was a UK top twenty album, and their hardcore audience is both dedicated and loyal to the band's unique sound. At the core of the band's music is an exploration of electronic musical textures and compulsive, danceable grooves interlaced with strong melodies and multi-ethnic musical references.