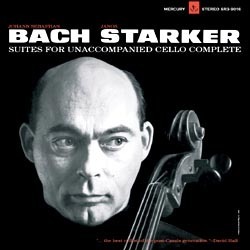 "The sound on this Speakers Corner reissue, mastered by Willem Makke at Universal's Berliner facility in Hanover, from Harold Lawrence's original three-track mastertapes, is superb. The cello, situated to the right of stage center and back a bit from stage front, is gorgeously rich and full in tone color; dynamics are exceptionally impressive...There is music for occasions, and there is music that creates a world to dwell in, rather than merely visit - Bach's Cello Suites are quintessentially the latter. This is a set that all music-loving audiophiles should own." - Jonathan Valin, The Absolute Sound,

Hi-Fi+ Record of the Year  "Although Speakers Corner has already won a Product of the Year award for their Mercury Living Presence project, I felt, and after some persuading so did RG, that the release of Janos Starker's highly regarded set deserved its own recognition. Timed to honour Starker's eightieth birthday last year, this is an extremely special reissue...This is one of those records that seems to hold a magic mirror to sound - in this case the sound of a man playing a violoncello in space, in time, captured forever. This is a near physical manifestation of a performance out of thin air...I have always been a fan of the original records, but this is one of those rare instances, especially of such a highly regarded and sought after set, where the re-issue offers far greater pleasure and insight than the original release...Starker's technique, his touch, his grasp of instrument and line is simply as riveting and utterly convincing as one could ever hope to hear - and hear it you do...the icing on the cake is the memoir concerning Mercury and these particular recording sessions, written by Starker himself, exclusively for this release...Congratulations to Speakers Corner Records who have outdone themselves with this most valuable and masterfully produced set, a sentiment that seems to be becoming a habit." - Richard S. Foster, Hi-Fi+

TAS Recommended! Rated a 'Best Audiophile Label Recording' in the November 2009 issue of The Absolute Sound!

Rare originals of this recording have been going on Ebay for upwards of $1,500.

The sound quality and performance are absolutely to-die-for.

Today, it is difficult to understand that despite the tremendous Bach renaissance that took place in the 19th century, many compositions by the Cantor of St. Thomas’ Church in Leipzig had been underrated. The Cello Suites, for example, have been regarded for almost 300 years as purely a set of tricky etudes that every virtuoso in the making simply must tackle.

Janos Starker’s recording of the Suites from 1965 makes a lasting impression on the listener, and even record producers who are well used to recorded excellence have been highly impressed. Starker’s full-bodied sound and technical brilliance are complemented by his finely chiseled interpretation that lends immense expression to Bach’s thrilling harmony and verve to the strict rhythmic construction of the movements.

In terms of price and collectability the Starker discs are in a different league. The originals were made iby the celebrated Mercury Living Presence label, which some rank alongside Decca for quality of sound. Collectors usually go for the 3-LP boxed set (SR3-9016), a choice of the standard maroon or gold promotional labels (which fetch between £500 and £2,000 at auction) and are – needless to say – rare. The set was re-issued on the Mercury Golden Imports label and then remastered by Philips (who owned Mercury) and compressed onto two discs. These, and especially the latter, are – according to received opinion – of inferior sound quality, so enter Speakers Corner, re-pressing its 2004 transfer.

The First Suite’s 'Praeludium' emerges from the loudspeakers with startling presence and realism, and there is a sense of reverberant acoustic and space around the sound, which makes any SACD crude by comparison. Each register is controlled, with no spurious bass echo and an exceptionally full treble, which allows one to appreciate Starker’s masterly control of variable vibrato and almost complete absence of finger noise. The Second and Fifth Suites were recorded earlier, and the cello sound is far larger and very different – most of this is down to Starker having changed cellos in 1965, from the huge 'Lord Aylesford' Stradivarius to a more conventionally sized Goffriller instrument – and there is less reverberation. By any standards this is marvellous sound.

In the superb eight-page booklet (LP size!) Starker writes about Bach and the difference between performing in the concert hall and recording studio. He says that “on stage minor technical mishaps are of little significance. Personality, communicative power and convincing artistry take precedence. On a record repeated hearing magnifies shortcomings, technical and musical.”

After listening to the Suites in one sitting, I can only say that by the cellist’s own standards these sound like live performances, without any shortcomings. The technical mastery is absolute (the Fourth Suite was recorded in one take), there is sweep, power and a frightening intensity of expression that is exhilarating and ultimately profoundly moving.

Like all great Bach-players Starker effortlessly conveys an underlying sense of timeless logic and, to use a word that seems to have gone out of fashion: spirituality. As you would expect and hope for, each of Starker’s complete recordings of the Suites has differing points of emphasis,

but this Speakers Corner/Mercury set is one of the few that deserves, and stands, comparison with Pablo Casals. Yes you can buy them on CD for considerably less, but the sound on these LPs is immeasurably superior. 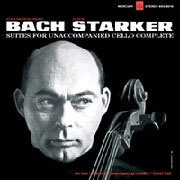