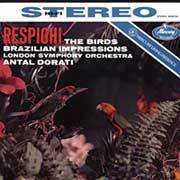 As you'll read in James Lyons's Iiner notes for this disc, Respighi was a nostalgic artist who preferred the melodic, romantic music of a bygone era to the atonal, serial, avante-garde constructions popular when these retro-impressionistic compositions were written in 1927. Five years later, when he was 53 the Italian composer joined other like-minded composers in signing what the notes refer to as an “extraordinary manifesto” against the new music. “

…..the romanticism of yesterday will again be the romanticism of tomorrow,” insisted their impassioned proclamation. The only composer of the bunch who ended up mattering was Mr. Respighi, so what he was doing hanging with all of those losing no-talents I don't know, but as with his other big faves “The Pines of Rome” and “The Fountains of Rome,” these two musically descriptive pieces are melodic, emotional, and colorfully drawn with the baroque-ish beginning of “The Birds” sounding like the theme from a PBS special. The catchy melodic riff develops quickly and resolves at the end as neatly as the music for any contemporary sitcom.

The birds appear in the next section, played by strings, woodwind and brass in recognizable but suitably abstract musical outfits. They fly in and out of the composer's stately musical thicket giving the piece both whimsy and charming grandeur. “Brazilian Impressions,” is not Brazilian music-then or now. It is another evocative exercise in rich melodies and lush, stately orchestrations more interested in communicating Respighi's impressions of Brazil the country than of the country's music. This is a fabulous recording from July of 1957 at Watford Town Hall near London and features spectacularly natural, transparent and well organized sound- no apology needed because of the early date.

The balance between the orchestra and the hall is outstanding, with a good mix of immediacy and reverberant field. Instrumental textures are delicate and vivid, with a fragrant harmonic bloom. I have an original FR 1 pressing and that sounds completely different than this Speakers Corner reissue mastered from the original two track mix by Willem Makkee at Universal's Hanover Germany facility. The original has a rich, prominent “tubey” midrange yielding delicate, ethereal and transparent images, the reissue is somewhat recessed in the mids with the accent on leading edge transients and some benign neglect on the musical “fill.”

My preference there is for the original. But the reissue sounds crystalline clear, with precisely drawn “faster” transients, more akin to the clarity you would hear live, though the orchestra seems to be playing in a dark space devoid of air and dimensions compared to the original. So it's a mixed bag. I don't want to be an absolutist like some reissue writers and discourage you from buying this so you pine away for a clean original which you either won't find or can't afford. These are different experiences, each having pluses and minuses, though the reissue's dead silent backdrops will beat any original you might find.

A much desired album brought back to analog life and well worth picking up.

Featured in Michael Fremer's Heavy Rotation in the July 2005 Issue of Stereophile!  It was Respighi’s fascination with ancient dances and songs that inspired him to write his bird suite. His great love for such music is felt in every single movement of this work. While Respighi imbued each of the bird portraits with his very own sound coloring typical of his time, there is an original masterpiece by a Renaissance or Baroque composer lurking in the background.  "Speakers Corner has given these recordings the respect they deserve. The packaging is gorgeous: a black album titled "The Living Presence of 20th Century Music" and displaying the Mercury logo holds the three records with their original covers and liner notes. In addition, there are informative annotations on the music and Dorati, and a history of Mercury Living Presence...They sound at least as good and in some ways better than the originals...There are no negatives and not enough superlatives to describe these magnificent reissues. It's rare that performance, sound, and musical value combine at this level in a recording." - Arthur B. Lintgen, The Absolute Sound, February/March 2004 Musicians: London Symphony Orchestra conducted by Antal Dorati. Selections:
Respighi The Birds Brazilian Impressions