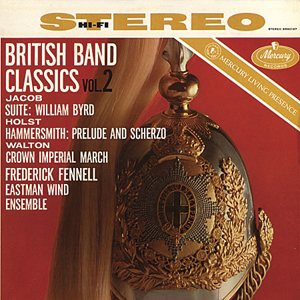 British military bands are as much a part of life in England as is the famous cup of tea! Just as the hot drink has its very own aroma, British bands have their very own imitable sound which is only to be found where it is brewed. Of course, theres always an exception, such as when the highly decorated and well-versed Eastman Wind Ensemble and their experienced leader Frederick Fennell set their foot on English soil. The American musicians prove that they can do more than justice to Gordon Jacobs arrangements of suite movements which William Byrd originally wrote for the harpsichord in the 17th century. With well-marked rhythmic contours and a freshness of tone, Fennells men pipe the music in lofty heights.
In Gustav Holst’s "Hammersmith" the ensemble really flexes its muscles and produces precisely the saturated, organ-like cascades of sound that only a wind band can. The 'Eastmen' pull out all the stops, as it were, in Walton’s "Crown Imperial March", thus following the dramaturgical plan of this album which begins softly and dies away in splendour.