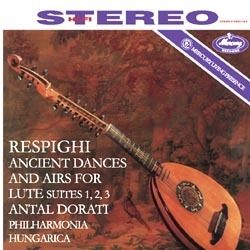 Dept. of Corrections: Due to a miscommunication between myself and Speakers Corner's Kai Seeman, I was led to believe this lush, yet detailed reissue was the first to be mastered by Maarten DeBoer, after the retirement of Willem Makkee at the newly refurbished Berliner Mastering facility in Hanover, Germany. Unfortunately, that information was incorrect, though the original, erroneous headline remains. This release was the last to be mastered by Mr. Makkee, who retired after mastering this. Makkee went out in style as this reissue of a much sought after original Mercury title is a superb-sounding transfer that's rich, detailed and dramatic.

It easily bests the Golden Import version I have and while I haven't heard an original, Mercury connoisseur Richard Foster told me it beats the sound of the original. The elegant, stately dance music, written by the Italian composer better known for "The Birds," "The Pines of Rome" and "The Fountains of Rome," and performed by the Philharmonia Hungarica, is based on music originally written for lute.

Comprised of three suites written between 1917 and 1932 and scored variously for flute, oboe, clarinet, bassoon, brass, timpani, celesta, harp and strings, the melodic "street" music is easily grasped and falls on the ear with a comforting familiarity. Respighi's lush yet open and airy arrangements cast a warm, sumptuous, delicate glow that acknowledges the age of the compositions while casting them in modern, 20th Century wrappings.

As a way into "classical music" this rich, spacious recording made in the largest (1840 seat) of the three venues contained within the Vienna Konzerthaus using three omni-directional microphones is difficult to beat. The sound verges on intoxicating, with transparent strings that are light as soufflé and plucked instruments that capture the transient bite with proper speed and authority. The stage is wide and very deep with the recording perfectly capturing the reverberant field and giving it just the right amount of attention so that the instruments project both delicacy and immediacy.

The common practice in concert houses today of performing early music on modern orchestral instruments is owed largely to the endeavours of Ottorino Respighi. His free transcription of Renaissance works for the lute (1932) opened up the way to the rediscovery of forgotten rhythms and timbres. Although Respighi altered the structure of the music by dissecting phrases right down to their basic elements, re-ordering them and redefining their sonority by the use of heavy brass and timpani, the art of the ancient maestri remained unscathed. Cadences and harmonic idioms are given a modern colouring at the most, but are never destroyed.
Antal Dorati and his famous Philharmonia Hungarica have all that is needed to bring the score to life. Even in opulent passages the individual instruments can be heard distinctly, and clearly defined one from one another. This works particularly well in the first two suites in which each movement is treated to a process of refinement by means of differing orchestration. That the third suite, written purely for stringed instruments, soars away just like the proverbial Aeolian harp is only to be expected from this orchestra.
Aufnahme: Juni 1958 im Großen Saal des Konzerthauses, Wien, von C.R. Fine
Produktion: Wilma Cozart-Fine