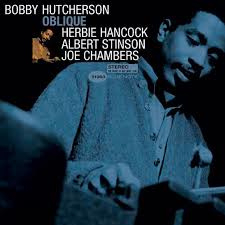 Oblique is one of only two quartet sessions the great vibraphonist Bobby Hutcherson recorded for Blue Note (the classic Happenings being the other). Both albums featured the seminal pianist Herbie Hancock and drum master Joe Chambers, with the only variable in the line-up here being bassist Albert Stinson. Hutcherson’s breezy opener “‘Til Then,” Hancock’s tremendous “Theme From Blow Up,” and Chambers’ adventurous “Oblique” are standouts of a session that, taken as a whole, is an incredible journey from hard bop grooves to exploratory sonic tone poems. Recorded in 1967, the album wasn’t first released until 1979.

B1: Subtle Neptune
B2: Oblique
B3: Bi-Sectional