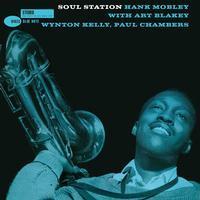 Tenor saxophonist Hank Mobley had already led nine dates for Blue Note Records by the time he arrived at Rudy Van Gelder's studio on February 7, 1960 with pianist Wynton Kelly, bassist Paul Chambers, and drummer Art Blakey, but on that day the quartet laid down what would become his masterpiece: Soul Station. The crystalline six-song set was a showcase for Mobley's lyrical flow from the breezy opening take on Irving Berlin's "Remember" through bluesy originals like "Dig Dis" and the title track, and the swinging up-tempo numbers "This I Dig of You" and "Split Feelin's." Soul Station endures as a jazz classic for the ages.
This Blue Note Classic Vinyl Edition is all-analog, mastered by Kevin Gray from the original master tapes, and pressed on 180g vinyl at Optimal.
Blue Note is proud to present the Blue Note Classic Vinyl Reissue Series, a continuation of their acclaimed Blue Note 80 Vinyl Reissue Series which was launched in celebration of their 80th anniversary in 2019. The Classic Series will once again feature all-analog 180g vinyl pressings in standard packaging that are mastered by Kevin Gray directly from the original master tapes and manufactured at Optimal in Germany.
In a review of the BN80 Vinyl Edition of Dexter Gordon's Doin' Allright, Analog Planet wrote "this reissue is a success for Blue Note in terms of quality at a great price point, and I look forward to the rest of this excellent and affordable series." In selecting the BN80 Vinyl Edition of Herbie Hancock's Takin' Off as their Recording of the Month, Stereophile awarded the sonics of the pressing 4½ stars writing "The sound of this reissue is strong and articulate, with balance and clarity from all the instruments."
The Classic Series will be on-going, running alongside the Tone Poet Audiophile Vinyl Reissue Series which is produced by Joe Harley.
Overall, this is a stellar set from one of the more underrated musicians of the bop era., 5/5 stars
Blue Note Classic Vinyl Reissue Series
180g Vinyl LP
All-Analog Pressing
Mastered by Kevin Gray from original master tapes
Manufactured at Optimal in Germany
Musicians
Art Blakey drums
Paul Chambers bass
Wynton Kelly piano
Hank Mobley tenor saxophone
Selections
Side A:
Remember
This I Dig Of You
Dig Dis
Side B:
Split Feelin's
Soul Station
If I Should Lose You