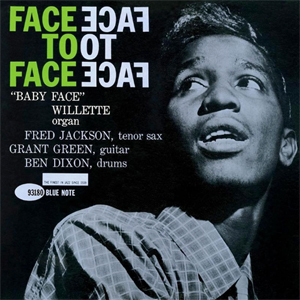 Hammond B-3 organ soul jazz fans know and love the music of Jimmy Smith, but lesser known is the tragically short life and career of Roosevelt "Baby Face" Willette who produced some of the deepest grooves ever recorded on the B-3 on just two Blue Note albums recorded in 1961. Willette’s debut Face to Face is a showcase for his blues-drenched organ pyrotechnics. Joined by the brilliant guitarist Grant Green, tenor sax master Fred Jackson and the rock-solid drums of Ben Dixon.

Nicknamed "Baby Face" on account of his fresh features and youthful visage, soul jazz organist Roosevelt Willette played his instrument with a sanctified fervour that reflected his roots in gospel music.

The so-called Tone Poet (Joe Harley) is confident that his audiophile reissues will allow 21st-century listeners to hear what the musicians heard as the master tape was played back on the studio monitors in Rudy Van Gelder’s studio 50 or 60 years ago. He believes that, in terms of quality, Blue Note albums have never sounded or looked better. "Every aspect of these Blue Note releases is done to the highest possible standard," he says. "It means that you will never find a superior version."