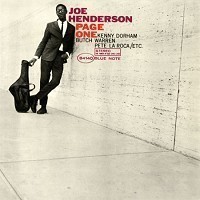 This 1963 Blue Note recording finds tenor saxophonist Joe Henderson joined by McCoy Tyner, Kenny Dorham, Butch Warren, and Pete La Roca. Due to his signing with the Impulse! label at the time, McCoy Tyner's name was left off the cover.

While Joe Henderson seemed to arrive fully formed on his auspicious 1963 debut Page One, the album was really a showcase for the transcendent collaboration between the tenor saxophonist and trumpeter Kenny Dorham who would form a potent frontline team on numerous classics. Opens with a pair of indelible Dorham compositions ("Blue Bossa"/"La Mesha"), the 6-song set penned by Henderson includes "Recorda-Me."

In a review of the BN80 Vinyl Edition of Dexter Gordon's Doin' Allright, Analog Planet wrote "this reissue is a success for Blue Note in terms of quality at a great price point, and I look forward to the rest of this excellent and affordable series." In selecting the BN80 Vinyl Edition of Herbie Hancock's Takin' Off as their Recording of the Month, Stereophile awarded the sonics of the pressing 4½ stars writing "The sound of this reissue is strong and articulate, with balance and clarity from all the instruments."

The first 16 titles of the Classic Series will focus on the enduring classics of the Blue Note catalog, kicking off on December 4 with the release of two masterpieces - pianist McCoy Tyner's The Real McCoy and trumpeter Lee Morgan's The Sidewinder - both of which are available for pre-order now. The Classic Series will be on-going, running alongside the Tone Poet Audiophile Vinyl Reissue Series which is produced by Joe Harley.