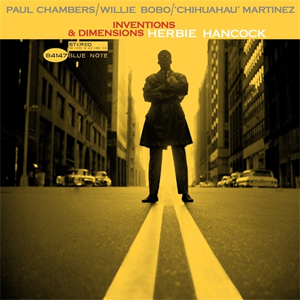 All-analog mastering by Kevin Gray from the original master tapes

For his third Blue Note album Inventions & Dimensions (1963), pianist Herbie Hancock began moving away from the modernist hard bop sound that defined his first two albums Takin' Off and My Point Of View. Inspired by explorers such as Eric Dolphy and Tony Williams, Hancock went in search of greater musical freedom by composing a set of ingenious originals each with their own unique inner logic that did away with what he considered the established jazz "assumptions" of the time.
Hancock also pared the instrumentation down to feature his piano with Paul Chambers' bass and a nuanced rhythmic bed laid down by percussionists Willie Bobo and Osvaldo "Chihuahua" Martinez. On the album's unforgettable cover the designer Reid Miles lets Francis Wolff's imposing photo of Hancock on an NYC street do all the talking.
This Blue Note 80 vinyl edition is all-analog, mastered by Kevin Gray from the original master tapes, and pressed on 180-gram vinyl at Optimal in Germany.
Musicians
Herbie Hancock piano
Paul Chambers bass
Willie Bobo drums, timbales
Osvaldo "Chihuahau" Martinez conga, bongo
Side A
1. Succotash
2. Triangle
Side B
1. Jack Rabbit
2. Mimosa
3. A Jump Ahead