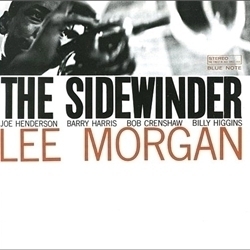 It came about purely by accident. At the end of a Lee Morgan record date in 1963, one more song was needed. The trumpeter quickly put together a catchy ditty with a boogaloo rhythm that he called “The Sidewinder.” While it was born as an afterthought, “The Sidewinder” became Morgan’s biggest hit and launched a boogaloo craze, even being used on a nationally televised commercial.

The irresistible playing by Morgan, Joe Henderson and a rhythm section propelled by Billy Higgins made this into one of Blue Note’s biggest selling records. Lee Morgan, who was 25 at the time, had already been a household name in jazz for seven years. He began recording for Blue Note as a leader in 1956 when he was just 18, had been a featured member of the Dizzy Gillespie Big Band while still a teenager, and had been the star of Art Blakey’s Jazz Messengers during 1958-61.