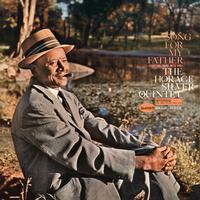 As a pianist, composer and bandleader, Horace Silver practically originated and certainly was the symbol of funky jazz. His playing looked beyond Bud Powell to church music, the blues and his Cape Verde musical heritage. Silver's songs were catchy, soulful and consistently stuck in one's memory. And his bands, featuring a trumpet and tenor front line, always had a sound that was definitive of hard bop. But even with Silver's string of brilliant recordings for Blue Note, Song For My Father stands apart from the rest.

The title cut became a much-covered standard as soon as this record was released, Joe Henderson's "The Kicker" also caught on, and every selection (including Silver's passionate ballad "Lonely Woman") is filled with Horace Silver's charm, wit and soul. No music collection is complete without this jazz classic.

A decade into his recording career, pianist Horace Silver made the album that would endure as the crown jewel of a catalog that boasts numerous hard bop classics. Song For My Father captured the transition of his quintet with two tracks taken from an October 1963 session with Blue Mitchell, Junior Cook, Gene Taylor, and Roy Brooks. A year later Silver entered Val Gelder Studio again with a new band featuring Carmell Jones, Joe Henderson, Teddy Smith, and Roger Humphries for a session that yielded four more cuts including what would become his signature tune, "Song For My Father," a dedication to his father that was inspired by both his Cape Verdean heritage and the music Silver had heard on a recent trip to Brazil.