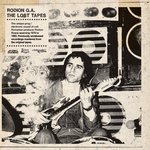 *The first ever retrospective of fabled band Rodion G.A., one of Romania’s best kept musical secrets of the last 30 years* "As a band, Rodion G.A. were a unique phenomenon in their homeland, operating in their own universe during a prolific period of recording from 1978 to 1984 at a time of significant political repression under the Ceausescu regime.

Bandleader, Rodion Ladislau Rosca, was an enigma. As half-Hungarian, half-Romanian, he lived near the border in Cluj, a city with a healthy music culture which had spawned important prog rock bands incuding Cromatic, Experimental Quintet and Semnal M. Here, Rodion managed to find vinyl, becoming known amongst friends as “King Of Records”. As such, he became equally as steeped in the major Western rock artists of the era – Hendrix, The Beatles, Led Zeppelin – as he was many of the electronic pioneers. He met Kraftwerk during their early days.

Despite the political conditions, a music scene existed in Romania, mainly within a network of festivals around the country and in seaside towns at restaurants and clubs. Bands would push the rules, often playing Western covers and venue owners had to be careful, getting to know when inspectors may drop by. Rodion was no exception. He remembers one occasion when an inspector came to listen to a band soundcheck. Despite singing in Romanian, the inspector pulled them up for singing “yeah yeah yeah” during a chorus. From the start, Rodion was concerned with his own style of composition and set himself apart from the predominant rock sounds that dominated Romanian music during the late ‘60s.

Technically and in his compositions, he was obsessed with every detail. His first sessions were recorded during 1969-1972 - simple, sparse and haunting pieces using reel to reel recorders, based around vocals, guitars and improvised drums. In 1975-6, Rosca formed Rodion G.A., the ‘G.A.’ comprising band members Gicu Fărcaș and Adrian Căpraru. Rosca had amassed equipment and became a DIY tech wizard, improvising his own techniques of composing using reel to reels.

Surrounded by three or four Tesla tape machines, he would record beats and guitar on one channel of the tape, then stop and add other instruments on the other – a raw means of multi-tracking. He would use the other machines to add effects and delays on both instruments and vocals. Other tools in his armoury included an East German Vermona drum machine, a toy Casio VL Tone and a small Russian organ to which he added phaser, flanger and delay pedals. For the band’s gigs, he even made by hand his own rig with ‘Rodion G.A.’-branded speaker boxes and amps. From the start, the band’s sound was incomparable to other contemporaries. Other Romanian musicians like Mircea Florian had moved from a folkrock background to experiment with more electronic productions but Rodion was different - dense electronic sounds, raw programmed rhythms, intricate arrangements, prog and classical touches.

The band’s recorded output in Romania at the time was sparse. There was only one label operating, the State-owned Electrecord, and they recorded two tracks by Rodion G.A. for a compilation, ‘Romanian Rock Vol. 6’. In 1981, the tracks were picked up by radio and Rodion even hit the top of the Romanian charts for several weeks. Beyond this, no other releases surfaced and yet the band recorded prolifically during the early ‘80s. Other records nearly materialised – the band scored the soundtrack to an animated movie, ‘Delta Space Mission’ in the mid-‘80s but the tracks were refused by the film company who then employed prolific Romanian electronic / pop producer Adrian Enescu for the job.

The band’s only other documented performance during their career was a show on Romanian television celebrating New Year’s Eve in 1980. Rodion G.A. eventually split in 1987 following a gig at Mangalia Festival and Rodion then walked away from music following the death of his mother. Fast forward to 2012 when the myth of Rodion G.A. came to the attention of excellent Romanian production and DJ crew, Future Nuggets, a collective as dedicated to unearthing Romania’s musical past as they are forging new sounds steeped in the country’s traditions. As well as this album, a partnership with Steve Kotey of Ambassador’s Reception has led to a compilation of their own studio work including their acclaimed psych-jazz album as Steua da Mare."