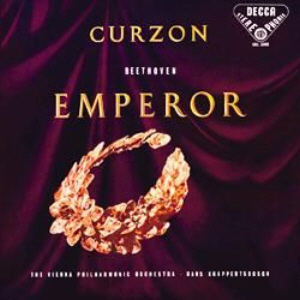 I remember listening one afternoon to Curzon and Knappertsbusch play the Adagio un poco moto from Beethoven's Piano Concerto 5, the "Emperor" (LP, Decca/Speakers Corner SXL 2002, one of the loveliest records ever made -Stereophile

The Concerto No. 5 in E flat major for Piano and Orchestra, composed in 1809 at the time of Napoleon’s siege and occupation of Vienna, was Ludwig van Beethoven’s last work in this form. The heroic optimism at the heart of the Concerto finds expression in the majesty of its design and the innovative virtuosity of the solo part. The dialect between piano and orchestra creates an electric atmosphere of brooding depth and sweeping grandeur. Beethoven’s choice of key, the E-flat major, was not arbitrary but gave voice rather to the wild pathos in his own soul.

Clifford Curzon’s interpretation of the score is intelligent and refined, his execution characterized by introspective discipline.

The exemplary interplay between Curzon and Hans Knappertsbusch evokes the chiaroscuro latent in each of the Emperor’s three movements. The Vienna Symphony Orchestra displays its customary brilliance throughout.

This DECCA recording, one of the very earliest in stereo, is convincing both musically and tonally. More than a document, it is a milestone in musical history.

I remember listening one afternoon to Curzon and Knappertsbusch play the Adagio un poco moto from Beethoven's Piano Concerto 5, the "Emperor" (LP, Decca/Speakers Corner SXL 2002, one of the loveliest records ever made -Stereophile

I wonder who decided to hand Knappertsbusch the baton for this
recording of Beethoven's last piano concerto with Clifford Curzon. His
uninspired direction taints a performance that could otherwise have been
an enlightening recording of Ludwig's 1809 testament to the genre.
Beethoven's Fifth is filled with optimism and bravery, composed when
Napoleon loomed large at the doors of Vienna. But don't look for these
potent sentiments in Knappertsbusch's direction of a tired and
unenthusiastic Vienna Philharmonic Orchestra. Knappertsbusch was
known for his live operatic performances and his absolute aversion for
studio recordings. Well, here it shows. He leaves Curzon alone with the
mission to make this an interesting performance and the British pianist
actually manages more than once to pull the whole together thanks to his
original rhythmic contrasts in the first and third movement.  As is often the case, the introspective and intellectual Curzon is at his best in the slow movement and the "Adagio un poco moto" gives him fantastic material to express his lyrical talent but there again the emotional support from the orchestra is pretty close to non-existent. Despite the great re-mastering job by Speakers Corner, this recording does show some of its age, with the lower register of the piano sounding dulled and the strings a bit more strident than desirable. The fact that this recording, one of the very first stereo recordings ever made, still sounds this credible is fantastic testimony to the quality of the original take. While the sound quality can't quite compare to recordings made a decade later, it is far better than anybody should reasonably expect  6 Moons 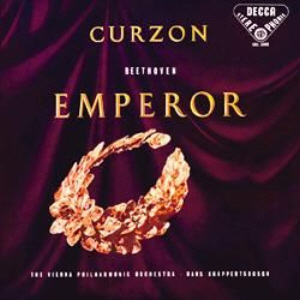