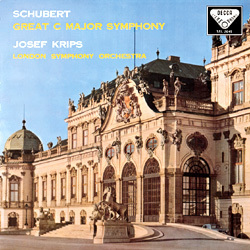 Speakers Corner 25 Years Pure Analogue  This LP is an Entirely Analogue Production
The horn that opens Schubert's Symphony 9, in the famous recording by Josef Krips and the London Symphony Orchestra (LP, Decca/Speakers Corner SXL 2045), didn't just play the line—it sang it. Each note was individually shaped, as if by a human voice: amazing. - Stereophile
Stereophile Magazine Record to Die For!

This is Schubert’s longest symphony, and its music has been described as heavenly. The symphony is typically and specifically Schubertian in its form, occupying a position in the history of music between Beethoven, Bruckner and Mahler – right on the threshold which separates classicism from romanticism.

It is hard to say if Josef Krips ever succeeded in making a finer recording. The presentation has a direct, unforced spontaneity, confirming that Krips had an intuitive understanding of Schubert’s compositions. The orchestra plays with dynamic vivacity without ever sounding aggressive. The interpretation of the two final movements is delightful in its airy exhilaration: swaying in a dance-like rhythm, tripping lightly through virtually every key there is, and in between, in the Scherzo, the gravity of the trio. The Finale, again, is merry in character with triplets rushing past, and the listener revels in every single repetition as the magnificence of this work reveals itself.

The inspired orchestra does full justice to the music and renders an interpretation in the Viennese tradition at its very best. This recording simply cannot be surpassed in terms of performance or sound quality – it is a must not only for the lover of Schubert’s music.

The 1978 Penguin Guide to LPs wrote, "Josef Krips never made a finer record than this ... The performance itself has a direct, unforced spontaneity, which shows Krips' natural feeling for Schubertian lyricism at its most engaging. The playing is polished yet flexible, strong without ever sounding aggressive. In the two final movements Krips finds an airy exhilaration which makes one wonder however other conductors can keep the music earthbound as they do. The pointing of the trio in the scherzo is delectable, and the feathery lightness of the triplets in the finale makes one positively welcome every single one of its many repetitions. As a whole this reading represents the Viennese tradition at its very finest."

Schubert
Symphony No. 9 in C Major 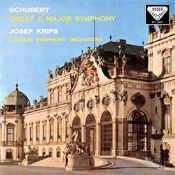