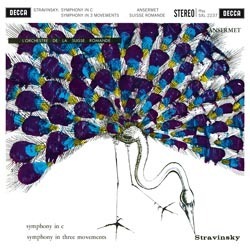 Speakers Corner 25 Years Pure Analogue  This LP is an Entirely Analogue Production
Igor Stravinsky: Symphony In C (1940), Symphony In Three Movements (1945) - Orchestre de la Suisse Romande conducted Ernest Ansermet
﻿It is well known that the mature Stravinsky was candidly scathing about some of his early compositions. However, he did subscribe a measure of academic value to his very first symphony, if only to show how one should not compose. In the following decades he wrote his so-called neo-classical symphonies, but these too found no mercy in the eyes and ears of avant-garde extremists, and are thus among the most underestimated orchestral compositions of the 20th century.
The new aspiration to write with clarity and simplicity, and so turning away from late-romantic and impressionistic expression, is already found in the key of C major, which has no accidentals. But the compositional technique is tricky: sharp polytonal melodies grow out of tonal islands, which, however never result in pleasant-sounding cadences even after numerous attempts to do so.The Symphony in Three Movements, too, breaks with tradition as regards its formal structure, which Stravinsky himself regarded as »naïve«. All the more intricate, however, is the ingenious melodiousness, which is unfolded with ballet-like rhythms by the whole orchestra.
This fresh, bold music definitely needs to be performed by an astute and dauntless ensemble – such as West-Swiss Orchestre de la Suisse Romande conducted by Ernest Ansermet, an ardent champion of modern works.
Aufnahme: ﻿April 1960 in der Victoria Hall, Genf, von Roy Wallace
Produktion: ﻿Ray Minshull
Decca's sound is in a different class on both discs. The image is exceptionally large, having depth and width without any loss of focus, the orchestra is placed at the exact rear of the speakers, and there is no excessive reverberation. Analogue sound is immeasurably superior to digital (and especially low resolution 16bit files) in its ability to capture instrumental timbre, so the wind section is brought vividly to life (warts and all) and the horns in particular have vibrancy. The massed strings have exceptional presence, but there is a slight lack of body in exposed high violin passages and the double basses sound tubby on SXL 2292 (but not 2237, where the lower bass is far more controlled). As always on Decca recordings the timpani are alarmingly, thrillingly realistic - you hear the sticks hit the skins – and forte passages have weight, projection and power, with each section of the orchestra clearly audible. In an ideal world there would be greater dynamic contrast but this is a small price to pay for what remains exceptionally truthful ‘walk-in’ sound. Second label, wideband pressings were used for comparison. The Speakers Corner LPs have more vibrancy and impact, are considerably cheaper, and much easier to acquire.
Musicians:
Orchestre de la Suisse Romande
Ernest Ansermet, conductor
Selections:
Igor Stravinsky (1882-1971)
Symphony In C Major (194))
1. Moderato alla berve
2. Larghetto concertante
3. Allegretto
4. Adagio - Tempo giusts, alla breve
Side Two:
1. First movement
2. Andante - Interlude L'estesso tempo
3. con molo
AAA 100% Analogue   This Speakers Corner LP was remastered using pure analogue components only, from the master tapes through to the cutting head 25 Years pure Analogue
MADE FROM THE ORIGINAL MASTER TAPES
AAA 100% ANALOGUE - PURE ANALOGUE AUDIOPHILE MASTERING
We use the Original Tapes and work with only the Best Mastering Studios Worldwide
180 GRAM VIRGIN VINYL  PLATED & PRESSED AT PALLAS GERMANY
Faithful Reproduction of the Original Artwork and Labels
LIMITED EDITION Released in Limited Quantities
All Licences and Mechanical Rights Paid