Speakers Corner 30 Years Pure Analogue  This LP is an Entirely Analogue Production
Dvorák: Symphony No. 5 “From the New World” - Vienna Philharmonic Orchestra conducted by Istvan Kertész
Another great Speakers Corner Decca LP. Sonics are great and so is performance Sound 5/5 LP review
Dvorák’s long experience with classical forms finds its culmination in his final symphony, whose first performance took place in New York in 1893. The work still enjoys an unwaning popularity thanks to its finely contoured orchestration and its original themes, all of which are based on American folksongs and negro spirituals.
To capture Dvorák’s score in sound has always proved a challenge for both orchestra and recording team. This aim has been more than fulfilled in the present recording with the Vienna Philharmonic Orchestra led by István Kertész: the primeval power of the weighty brass, the glorious revelling of the strings, and the lyrical solo passages are all captured here. Musicianship of the highest degree combined with audio-technical perfection lend this recording, made in the early days of stereophony, the status of an historical sound document which, despite numerous other recordings, has no reason to fear competition.
Marchz 1961 in Sofiensaal, Wien with  James Brown / Production: Ray Minshull
Vienna Philharmonic Orchestra. Istvan Kertesz (conductor). Kertesz's approach is as simple and straightforward as could be, yet the hushed intensity of the playing conveys a depth of feeling that makes one hear the music with new ears. There is plenty of excitement and the Vienna Philharmonic plays the Largo most beautifully.
Popularly known as the New World Symphony, in older literature and recordings, this symphony was often numbered as Symphony No. 5. It is widely known today as Symphony No. 9 in E minor, From the New World. Composer Antonin Dvorak wrote it in 1893, it is by far his most popular symphony.
Musicians:
Vienna Philharmonic Orchestra
Istvan Kertesz, conductor
Selections:
Dvorak
Symphony No. 5 in E Minor, Op. 95 "From the New World"
1. 1st movement - Adagio - Allegro molto
2. 2nd Movement - Largo
3. 3rd Movement - Scherzo (Molto vivace)
4. 4th Movement - Allegro con fuoco 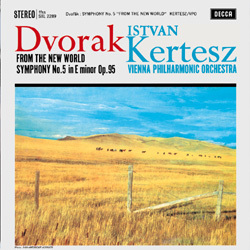