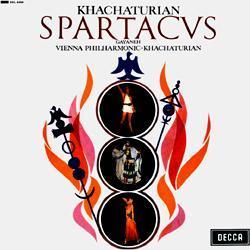 For music, Speakers Corner's Decca LPs were an easy choice. Speakers Corner not only used the true master tapes in the creation of its reissues, but also the actual equipment with which so many of the original pressings were created. Along with this, Decca engineer Tony Hawkins cut the lacquers. The results speak for themselves. - The Audio Beat

Over the years I have amassed multiple versions and extracts of Khachaturian's ballets but none that comes close to this version directed by the composer himself. . This re-edition in addition to be sonically splendid gives a completely different view of K's music - those are not showcase pieces for orchestras in need of thrill, they are deeply thought and masterfully orchestrated jewels. Forget Kunzel - this is the only version you'll ever need.LPReview

I can honestly say some of the Decca SXL series are truly the best recordings ever made. Try SXL6000 Khachaturian Sparticus/Gayanah which is very dynamic, sonically almost perfect, the CD is cheap performance peerless, being conducted by the composer. I think if you listen to it you might forget it was recorded in 1962. Gramophone Magazine

Aram Khachaturian, the most well-known of all Armenian composers, believed that art should be closely bound to the people and indeed it was a pre-requisite for his own creative inspiration. Largely uninfluenced by the manifold trends of the 20th century, Khachaturian’s works reflect the folk heritage of his native country.

In the two richly orchestrated ballets, which he himself later arranged into suites, we find the musical spirit and customs of an ancient culture. In particular the unrestrained exuberance of the Sabre Dance from Gayaneh has contributed to the immense popularity of this suite.

The ballet Spartacus could be described as a monumental historical drama and made Khachaturian one of the Soviet Union’s most highly honored composers.

That a slave uprising can not only be expressed in music but can also take place on an international dimension is admirably demonstrated by the maestro personally in this recording where Khachaturian takes on the role of leader of the Vienna Philharmonic Orchestra.