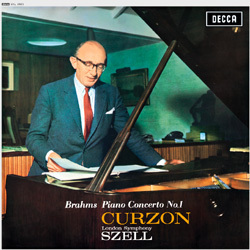 Stereophile Magazine Record to Die For!
The Speakers Corner LP reissue of the Decca original is superb: as good as this sort of thing gets.I've never cared for the idea of using a handful of spectacular recordings to test the abilities of a playback system, but this wonderful LP comes closer than any other to changing my mind. Stereophile.com
Brahms originally intended his Piano Concerto No. 1 as a symphony and he extensively reworked his ideas before setting down the work in the form as we know it today. The composer’s original intentions still shimmer through however, for the work goes far beyond mere concertante playing and a display of virtuoso brilliance by the soloist. The first movement in particular, with its relentless, threatening main theme, embodies Brahms’s dramatic symphonic writing and even a conciliatory secondary theme offers no relief for it too must give way to the heavy, fateful initial theme.
The passionate and grandiose opening movement is followed by an Adagio full of tranquillity and quiet devotion; the solemn atmosphere is taken to exalted heights by the soloist and orchestra only to fade out pianissimo.
Although the forceful, belligerent Finale occasionally conjures up the dark powers of the first movement, the work ends in a confident and cheerful vein.
It is amazing how the sheer presence of the emotions in this composition have been captured on the present DECCA recording from 1962.
This is not only true of the gripping interpretation but also of the recording itself which remains transparent and brilliant throughout.
Pianist Clifford Curzon joins the London Symphony Orchestra conducted by George Szell for this recording of Brahms'Piano Concerto No. 1.
This 1962 recording of Brahms's massive First Concerto was an instant classic when originally released. Pianist Clifford Curzon, Conductor George Szell and the London Symphony Orchestra unite for a Truly Stunning Performance! Clifford Curzon gets to the heart of the music, capturing the high drama of the symphonic opening movement, and his rapt concentration makes a profound effect in the Adagio, famous for his controversially slow tempo.
Conductor George Szell is his equal here, conducting with passion and intensity. The way he screws up the tension in the orchestra's opening statement and then, through judicious rubato and a warming of the string tone, makes the second subject come alive is a mini-lesson in great conducting.
"Clifford Curzon hated recording in general, and his relations with Szell were fractious at worst and civil at best. Together, however, they made what many consider the finest recorded performance of the Brahms concerto... From the opening bars, this reading grabs your attention. Szell gets the titanic orchestral introduction to rage like no other. ...Curzon proves a match for the orchestral mass, with a magisterial entry and huge singing tone." - Steve Schwartz, classical.net
"This 1962 recording has long been considered one of the very best performances and recordings of the difficult Brahms First Piano Concerto. It is one of the prime examples of the achievements of the Decca engineers of the time in getting lifelike sound, during this Golden Age of analog recording...The rich tone of Curzon's piano is a joy to hear..."
Maiy/ Jun 1962  Kingsway Hall, London ,  Kenneth E. Wilkinson / Production: John Culshaw
Selections:
Johannes Brahms (1833-1897)
Piano Concerto No. 1 in D minor, Op. 15
Musicians:
Clifford Curzon, piano
George Szell, conductor
London Symphony Orchestra
Selections:
Side One:
1. Maestoso
Side Two:
2. Adagio
3. Rondo - Allegro non troppo
Browse these categories as well: CLASSICAL, Home page
Contact information
Brahms - Concerto No. 1 - Sir Clifford Curzon : London Symphony Orchestra : George Szell - 180g LP - SCOTT NANGLE AUDIO
T&C's and Privacy Policy