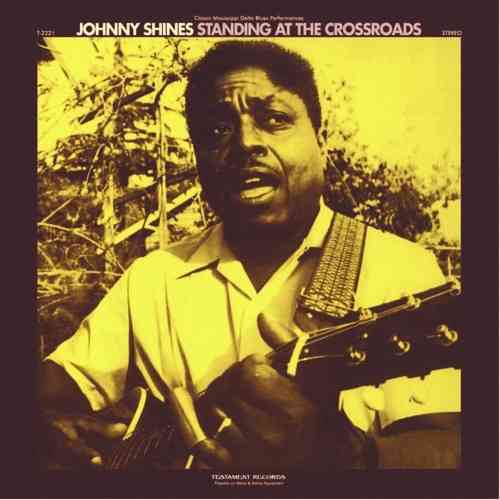 Testament Records founder Pete Welding recorded Shines at his home in November of 1970. Shines plays 11 classic Mississippi Delta blues tunes and turns in one of the masterpieces of the genre. The recording is both intimate and raw. Remastered by Ray Staff of Air Studios, the reissue hues close to the sound of an early original. This is a treasure not to be missed. - Audiobeat
"This is one of several albums this artist made in the early '70s that stand as a masterpiece of the acoustic country blues genre. Johnny Shines had begun recording in the mid-'60s, the albums done with electric guitar and full-combo backup, one of them reportedly cut after he hadn't picked up an instrument in years. It was as if he reinvented himself in the following decade, playing pristine and flawless acoustic slide guitar pieces complete with shuffling, stuttering, and stimulatingly complicated tempos.
"The message was that he had been a young sidekick to Robert Johnson and had absorbed everything, although no deal had been made with the Devil. Shines was a steady, dependable, religious, and forthright chap who lived in Tuscaloosa, Alabama and held down a steady job as a construction foreman. Mild-mannered and extremely intellectual, he let loose the reserve of emotion when doing a Delta blues number.
"The magic and heart were in his fingertips as well as in his voice, which sounds stupendous here. The emergence of the Johnson song canon into his repertoire, done with almost Baroque detail, was also something of a revelation. Some of Shines' earlier albums had featured songs that almost seemed made up on the spot. He was good at that, and was rumored to have played whole sets that were completely improvised when working the country juke joints of his home state, but on this album he showed what he could do when sinking his teeth into a bona fide blues classic.
"Kind Hearted Woman" is the musical equivalent of an absolutely perfect chopped-barbecue sandwich with sauce the way they do it in Tuscaloosa, and obviously of much less offense to vegetarians when taken in this form. There were 11 perfect songs chosen by Pete Welding from his set of recording sessions for this project. Once again this great producer has come up with a blues release that is basically a required item for any good collection of this genre.
Standing At The Crossroads is a tour de force of bottleneck acoustic blues. A pure art form, this recording (originally released on Testament Records) has been re-mastered (Ray Staff) for Pure Pleasure Records on 180-gram audiophile vinyl. The opening title cut is a near perfect fusion of bottleneck guitar and soulful blues vocals. “Death Hearse Blues” slows the blues down a bit and Shines responds with effervescent slide and pick solos. The evocative link to gospel is prevalent, especially on “Drunken Man’s Prayer”. Subtle touches, like a “picked” ending provide a colorful backdrop to this session.  The “foot-stomping” energy of these songs is always prevalent. “Hoo-Doo Snake Doctor Blues” features a mournful vocal and deft, fluid slide licks.
Blues music means trials and tribulations, as evidenced by the extended (at least for this album) version of “Your Troubles Can’t Be Like Mine”. While the inevitable correlation to Robert Johnson has been overused, Shines’ cover of “Kind-Hearted Woman” is terrific. He lets it all hang out with some falsetto and a blistering amalgamation of rhythm chords and individual notation. “My Rat” has some familiar runs, but with a touch of humor. The last bit of cautionary wisdom unfolds on “Don’t Take A Country Woman”, which showcases a flashy slide conclusion.
Pure Pleasure Records has managed to capture the raw acoustics of blues music and elevate it with modern technology. The tonal quality and clarity of the guitar and bottleneck slide are superior. Shines’ reedy voice sounds rich and powerful. The liner notes provide some significant details on this blues legend and some technical recording information (For example, all of the bottleneck-accompanied guitar tunings are open-G, except for one track).
Standing At The Crossroads is a classic recording, and worthy of any blues collection.
Jonny Shines was part of the second generation of Mississippi Delta bluesman, born 1915 his style was influenced by Lonnie Johnson, Blind Lemon Jefferson & Howlin Wolf, but his claim to fame was that he toured with Robert Johnson toward the end of that seminal artist's sort short life. He didn't meet with a great deal of success however, most of his recordings went unreleased, and spent most of his life working in construction.  On This Album (recorded in 1970) he sounds like a REMNANT OF A BYGONE AGE. His voice is strong & the acoustic guitar playing excellent but the style is very much in the vein of his youth, perhaps inevitably so, and this is a good thing.
Simple, Unornamented but extremely proficient bottleneck guitar and a voice that's full of feeling, works well in the context of of a recording quality rarely afforded to this classic blues style. The 11 numbers he plays are tratitional Delta tunes many of which Shines makes his own, you hear the ghost of Johnson on some but the same can be said of many great Bluesmen. You can also hear why Shines never had the impact of his more successful comtemporaries but that's not to say that's not to say this album is not worth attension today when there are so few authentic players of his ilk remaining 'undiscovered'.
Selections:
Side A:
1. Standing At the Crossroads
2. Milk Cow's Troubles
3. Death Hearse Blues
4. Drunken Man's Prayer
5. Hoo-Doo Snake Doctor Blues
6. It's A Lowdown Dirty Shame
Side B:
1. Your Troubles Can't Be Like Mine
2. Kind-Hearted Woman
3. Baby Sister Blues
4. My Rat
5. Don't Take A Country Woman 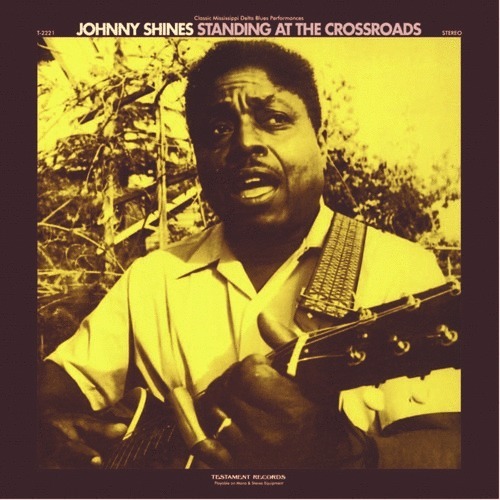