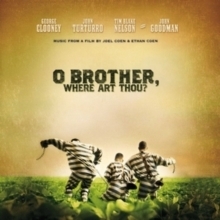 Although I don’t typically listen to bluegrass, gospel, or mountain music, here’s another case where a soundtrack expanded my musical horizons. This double LP from Lost Highway is so well recorded that it not only transfixed me, it made me smile. It featured some familiar artists (to me) like Alison Krauss and Emmylou Harris while introducing me to others. There’s a lot of wonderful pickin’ and singin’ on this one! -  Top Ten Soundtracks The Absolute Sound

The critical consensus at the end of 2000 was that it had been one of the weakest film years in recent memory. Which may have been true, despite O Brother, Where Art Thou?, the Coen brothers' delightfully warm and weird Depression-era re-telling of Homer's Odyssey. But for music lovers, 2000 was an amazing year at the movies, and it produced several excellent soundtrack compilations including Almost Famous, Dancer in the Dark, Wonder Boys, and High Fidelity.

Even with such steep competition, the soundtrack album for O Brother, Where Art Thou? may be the best of the year. In order to capture the sound of Mississippi circa 1932, the Coens commissioned T-Bone Burnett, a masterful producer whose work with artists like Elvis Costello, Sam Phillips, Joseph Arthur, and Counting Crows has earned him a special place in the folk-rock hall of fame, to research and re-create the country, bluegrass, folk, gospel, and blues of the era. The Coens were so taken with Burnett's discoveries that the film became a unique sort of musical revue. There are no original compositions here (though Burnett is given a "music by" credit usually reserved for composers), and the characters do not generally break into stylized song and dance numbers (as they do in, say, Everyone Says I Love You).

But nearly every scene in O Brother is set to a period song, and the music frequently drives and defines the action. With two exceptions -- a stunning 1955 Alan Lomax recording of a black prison chain gang singing "Po Lazarus", and Harry McClintock's "Big Rock Candy Mountain" -- every song was recorded for the film by an impressive assembly of old-time country veterans (Fairfield Four, Ralph Stanley, the Whites) and talented newcomers (Gillian Welch, Alison Krauss, Emmylou Harris). These recordings, which were made without the meddling clarity of digital technology, give the film much of its power and authenticity. A significant segment of the plot hinges on the (utterly plausible) notion that Dan Tyminksi's ebullient rendition of "I Am a Man of Constant Sorrow" could be a runaway hit. A memorable sequence involving three riverside sirens centers around an eerie version of "Didn't Leave Nobody But the Baby." And Stanley's a cappella performance of "O Death" sets a chilling tone for a climactic struggle at a Ku Klux Klan rally. Throughout, Burnett's steady guiding hand is evident. This soundtrack is a powerful tribute not only to the time-honored but commercially ignored genres of bluegrass and mountain music but also to Burnett's remarkable skills as a producer.

Selections:
1. Po Lazarus - James Carter & the Prisoners
2. Big Rock Candy Mountain - Harry McClintock
3. You Are My Sunshine - Norman Blake
4. Down In The River To Pray - Alison Krauss
5. I Am A Man Of Constant Sorrow - The Soggy Bottom Boys
6. Hard Time Killing Floor Blues - Chris Thomas King
7. I Am a Man of Constant Sorrow - (Instrumental - Norman Blake)
8. Keep On The Sunny Side - The Whites
9. I'll Fly Away - Gillian Welch and Alison Krauss
10. Didn't Leave Nobody But The Baby - Gillian Welch, Alison Krauss and Emmylou Harris
11. In The Highways - Sarah, Hannah and Leah Peasall
12. I Am Weary - The Cox Family
13. I Am A Man Of Constant Sorrow (Instrumental - John Hartford)
14. O Death - Ralph Stanley
15. In The Jailhouse Now - The Soggy Bottom Boys
16. I Am A Man Of Constant Sorrow (With Band) - The Soggy Bottom Boys
17. Indian War Whoop (Instrumental - John Hartford)
18. Lonesome Valley - The Fairfield Four
19. Angel Band - The Stanley Brothers