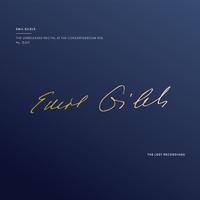 There’s absolutely no doubt that the recitals Emil Gilels gave at the Concertgebouw fall into this category. We’re immensely honored to have brought them back to life in close collaboration with his grandson, Kirill Gilels. This collection is an enduring tribute to the mastery of a classical giant who left us in 1985.

"In June 2017 I was supposed to perform in Moscow when I met Kirill Gilels, the grandson of the famous pianist Emil Gilels. He listened to what our Phoenix Mastering® restoration process can do and made the decision to entrust us with the results of several years of research: he gave us a list of dates and locations of his grandfather's previously unpublished recordings.
In Berlin, Moscow and Saint Petersburg we came across a treasure trove that amazed both in terms of the quality and consistency of Emil Gilels' playing. We were aware that he was one of the greatest musicians of the twentieth century.
In Amsterdam, we finally managed to track down this fabulous concert from 1976 at the Concertgebouw - recordings that had fallen into oblivion.
We were assigned a studio where we listened to the tapes one by one without saying a word, so overwhelmed by the beauty of what we heard." (F. D'Oria-Nicolas)

He is considered one of the most important pianists of the twentieth century and was a student of H. Neuhaus. He wins the current Queen Elisabeth Competition in Brussels and gains international renown. In 1955 he became the first artist from the Soviet Union to be received in the United States after the war: while on the one hand the audience at Carnegie Hall in New York accompanied his entry into the stage with restless silence, on the other hand he refused to leave it during the uninterrupted storm of applause.