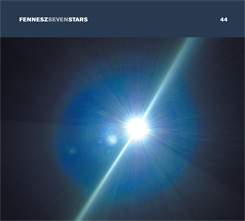 £8.99
Price includes VAT, plus delivery
Possible delivery methods: UK Tracked with Signature, UK Express, Airmail Tracked with Signature, UK Standard, Heavy Item
Touch - TONE44V - 4 Track 10 inch EP -  Limited Edition - 5027803904422
Fennesz's first solo release since Black Sea is a 4 track 10" vinyl, . Using acoustic and electric guitars, bass, synths, computers, Fennesz continues to engage and entrance us in equal measure.
Fennesz writes: "Seven Stars was recorded in Vienna in January 2011. I recorded and mixed the album within 3 weeks. Liminal and July were existing pieces which I have reworked. (I wrote an  early version of Liminal in a hotel room in Bali in 2010). There is also a version of Liminal that I have been playing live for some time. My friend Steven Hess, with whom I have worked before, happened to be in Vienna at the time of the sessions, so I invited him to join me in the studio. Christoph Amann recorded the drums using a selection of his great microphones including his amazing new Josephson.
I wanted to make a record that has a certain lightness about it and at the same time explore new territory using drums on one track. This might be something I will continue with in the future."
Seven Stars opens with Liminal, a track that perfectly defines Christian Fennesz’ style over the past decade, with dreamy guitar and electronic backdrop drones that lull over the listener like waves crashing gently into the Northeastern American shoreline. In its three short minutes, the track comes alive, breathing of cool evenings watching the sunset fade into the horizon, colors warmly changing from blues to oranges to pinks to black. Likewise, the re-worked rendition of “June” in July follows quickly behind the comforts of visually retaining that Summer beauty into a veil of dusk, a darkened mystery of metallic scraping and artificial chirping. The mood of foreboding night-time figures is met head-on by the scene set before, of insects emerging for the evening feast, of the creaking of piers over the deceptive and now unseen lull of the unforgiving sea. What we’re left with when the feast subsides is the simple stripped down heartbeat of night, carrying us over into the realm of sleep.
As the track implies, “Shift” takes from one world to the next, from the realism of a simple subset beauty and the following dark collapse, to the surrealism that shapes those memories into a decisively more personal and evolving experience. With the beach pop guitar style that Fennesz is known for, this last track combines minimal percussion and a jazzy progression to give us the lift we need to escape the confines of mortality and gravity to venture to The Pleiades (Seven Sisters). Seven Stars ends with a beautiful journey to end an evening once again brilliantly created through the pensive musicianship of Christian Fennesz. Sometimes illusory, sometimes astral — it seems like this musician flirts with perfection with every recording he creates.
Track listing:
1. Liminal 3:07
2. July 5:06
3. Shift 6:47
4. Seven Stars* 3:01
Browse this category: ELECTRONICA
Contact information
Fennesz - Seven Stars - EP - SCOTT NANGLE AUDIO
T&C's and Privacy Policy