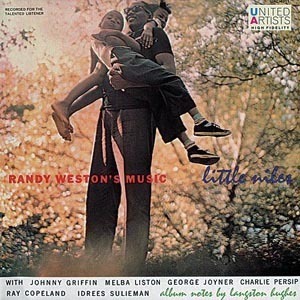 Randy Weston, one of the world’s foremost pianists and composers, a true innovator and visionary. Starting with the gospel of bop according to Thelonious Monk, Weston gradually absorbed the letter and spirit of African and Caribbean rhythms and tunes, welding everything together into a searching, energizing, often celebratory blend. His piano work ranges across a profusion of styles from boogie-woogie through bop into dissonance, marked by a stabbing quality reminiscent of, but not totally indebted to Monk.

Combining the Ellingtonish arrangements of Melba Liston with the rhythmically intriguing explorations of Randy Weston this album represented a high point in his career at the time. All the tunes, written by Randy Weston, were inspired by his children Niles and Pamela. The innocence, excitement, anticipation and tension of childhood are all displayed here in these warm vinyl grooves.

Like his early mentor Thelonious Monk, Randy Weston’s piano style is both original and steeped in jazz history. He drew upon the rhythmic drive of the Harlem masters, the rich chords and wide voicings of Ellington and the spare, jabbing right hand of Count Basie. To this mix, he would later incorporate melodic and rhythmic forms from all over Africa. And from the outset, he was a gifted composer with an early penchant for ¾ time; many of his tunes would become jazz standards eclipsing their creator in popularity.