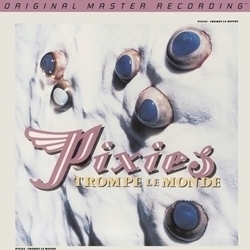 Half-Speed  Mastered by Kreig Wunderlich from the Original Master  tape

As it stands, Trompe le Monde takes its place as one of the finest swan songs ever recorded. If the Pixieswouldn’t have broken up right after its release, there’s no telling what would’ve happened. All that you need to know is that the 15-track effort is as hard rocking and brilliantly innovative as any of the group’s creations. That’s no small feat.

Mastered from the original analog tapes numbered limited edition presents the ensemble’s abrasively melodic landmark in a fidelity it’s never enjoyed in any prior version. Featuring lusher keyboards and moodier soundscapes than its predecessors, but also reclaiming the nasty guitar edginess and swooning distortion of the group’s earliest efforts, Trompe de la Monde finally comes across as the Pixies intended: A sonic bridge between college-rock’s influential cruder-textured albums and the polished professionalism that distinguished alt-rock classics.

In other words, Mobile Fidelity’s version presents it as the perfect-sounding album: Replete with grit, rawness, and character, but mixed in with radio-friendly smoothness and virtuosic professionalism. Awash with incredible timbres and tonalities, myriad new details rise to the surface. Listen to the counterpoint melodies and layered vocals on “Letter to Memphis”; the trash-compactor feedback and thumping bass during the whipsawing “Planet of Sound”; the “Spyhunter”-like pace and limitless depth now present on “Subbacultcha.” Dynamics, contrasts, low-end frequencies, and imaging are all significantly enhanced. Compared to the original CD, Trompe le Monde emerges as a new album—a sonic wonderland that’s not far removed from that of Nirvana’s celebrated blockbuster Nevermind.

Musically, the Pixies were never better. On par with the groundbreaking Surfer Rosa and Doolittle, Trompe le Monde explodes with hyper riffs, jerks to stop-start progressions, elates with cheerful emotions, and bangs on to giddy surf-fused arrangements. With Kim Deal absent from the songwriting process, vocalist/guitarist Frank Black takes the reigns and doesn’t disappoint. Tales about sea monkeys (“Palace of the Brine”), aliens (“Planet of Sound”), and love (“The Sad Punk”) bop alongside memorable jabs at hipster pretensions (“Subbacultcha”) and inflated egos (“U-Mass”). A contagious cover of the Jesus and Mary Chain’s “Head On” will have you hitting “repeat.” Power pop, wanderlust punk, theatrical glam rock, reconfigured reverb-laden country—all here, all encouraging repeat listens.

Nearly lost due amidst the alternative trend that it played such a key role in spawning, Trompe le Monde gets new life courtesy of this extremely punchy, greatly balanced Mobile Fidelity issue. If you missed it the first time, don’t make that mistake again. Essential with a capital “E,” and the perfect way to close Mobile Fidelity’s Pixies catalog restoration series. 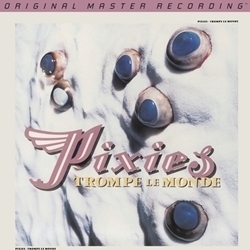