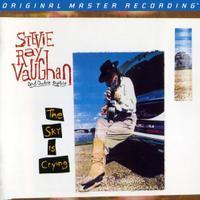 Comprised of ten previously unreleased studio performances from Stevie Ray Vaughan and Double Trouble cut between late 1984 and early 1989, The Sky Is Crying serves as the legendary guitarist’s unofficial “fifth” album as well as an homage to extraordinary musician’s exceptional abilities as a musician, songwriter, and interpreter. It also contains the tremendously moving “Life By the Drop,” the first-ever recorded take of Vaughan playing acoustic guitar. Few, if any, posthumous collections are more complete, satisfying, and revealing as this 1990 set.
With the set never before remastered , we have taken the honors seriously, remastering from the original master tapes and presenting these life-affirming songs in jaw-dropping fidelity on hybrid SACD. At times, it feels as if you are sitting in the studio control room with the band just a few feet away, as nearly every selection here was recorded live with minimal overdubs. The degree of presence, immediacy, and detail is on par with the best-sounding blues albums—on LP or CD—in existence.
When Vaughan was killed in a helicopter crash in August 1990, his brother, Jimmie, set to work on finding finished material that his younger sibling left in the vaults. To his surprise, there weren’t many completed leftovers—save for the tracks on this set, which lent to the opinion that, in some way, Vaughan intended The Sky Is Crying to be an actual record. Nearly every song here had long found its way into the group’s live sets, including the supremely soulful title track, bathed in Reese Wynan’s warm organ accompaniment. It would be a standout on most albums, but this effort is filled with such nonpareil matter.
Consider “Boot Hill,” a rarity in that Vaughan plays the slide guitar—the very first time he’s captured on record in this style. The song was left off of In Step due to its darker content. Or the insightful cover of Jimi Hendrix’s “Little Wing,” which seamlessly moves from tender to tough and back again; listen and you will hear Vaughan’s amp humming in the background. Vaughan’s formative influences get channeled on a slow-burn version of Howlin’ Wolf’s “May I Have a Talk With You,” during which the Texan incorporates the lyrics of several blues standards into the narrative for extra oomph. No matter what Vaughan is playing, his expressive techniques, dynamic contrasts, and jazzy tonalities rise to the surface.
This is due to our retrieval of previously hidden information and meticulous engineering that gives the music that sought-after breath of life. Everything from Vaughan’s syncopated rhythms to his hot-wired guitar licks sounds apiece, vibrant, and exactly as it should. Want to experience music played with ultimate conviction and soul-shaking integrity? Don’t wait another second to dive into The Sky Is Crying.
Bass – Tommy Shannon
Drums – Chris Layton
Guitar, Vocals – Stevie Ray Vaughan
Keyboards – Reese Wynans
Stevie Ray Vaughan The Sky Is Crying Track Listing:
1.    "Boot Hill"      2.    "The Sky Is Crying"     3.    "Empty Arms"     4.    "Little Wing"     5.    "Wham"     6.    "May I Have a Talk With You"      7.    "Close to You"     8.    "Chitlins con Carne"      9.    "So Excited"     10.    "Life By the Drop" 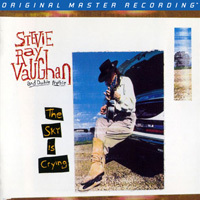