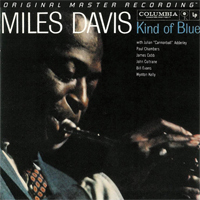 Half Speed Mastered by Shawn R Britton at MFSL

Sound 10/10 Music 10/10 - the result is outstanding . HIFI +
Kind of Blue has been in my record shelf since my earliest exposure to jazz; I can play the entire album in my "inner hi-fi". Having listened to the MoFi SACD in direct comparison to the Sony SACD and Classic Records LP, I can unreservedly recommend the MoFi SACD to all collectors and jazz lovers. It is a very well-made product, packaged—as are all of their current SACDs—in a mini-LP gatefold with a protective anti-static inner sleeve for the disc. Sound 6/6 HR Audio
Miles Davis Kind of Blue on Numbered Limited Edition Hybrid SACD from Mobile Fidelity Sound Lab
Best-Selling Album in Jazz History Receives the Prestigious Mobile Fidelity Treatment
This Mobile Fidelity Hybrid SACD is the Definitive Digital Version of the Mt. Rushmore of Jazz Sessions
Also Available from Mobile Fidelity:
A Dozen Five-Star Miles Davis Albums Spanning 1958-1971 on Definitive-Sounding LPs and SACDs
How does one properly introduce an epochal record? Perhaps by unequivocally stating that it is the best-selling jazz album in history. Or by affirming that, every year, it sells tens of thousands of copies more than five decades after its original release. There's also the matter of its status as the most-referenced, and arguably, most important, jazz recording of all-time. And the Dream Team lineup of Miles Davis, Cannonball Adderley, John Coltrane, Bill Evans, Wynton Kelly, Paul Chambers, and Jimmy Cobb. Yes, Kind of Blue is utterly inimitable.
Part of Mobile Fidelity's Miles Davis catalog restoration series, the landmark has been given the ultimate white-gloves treatment. Mastered from the original master tapes, this hybrid SACD edition of the often-reissued album is a must for even fans that already possess multiple versions. Such is the illuminating transparency, reference dynamics, organic warmth, and instrumental detail exposed by the thoroughly scrupulous mastering process.
If there's a stairway to heaven, this is the soundtrack.
In its three-decade-plus history, Mobile Fidelity has never been prouder to have the honor of handling efforts as important as Davis' key recordings. It's why the label's engineers took every available measure to transport listeners to the March and April 1959 sessions that parlayed modal jazz into mainstream language. The blueprint for melodic improvisation and vamping, Kind of Blue simplifies tonal organization and chordal progression into an eminently beautiful, introspective tapestry stitched with swinging poetry, mellifluous soloing, compositional lyricism, transcendental harmonies, and group interplay of the highest caliber.
While no one has ever completely identified the magic behind the record's allure – the otherworldly nature is part of its inherent charm – much of the success lies with the band members. Davis intentionally handpicked these musicians to comprise this particular cast, with everyone from former foil Evans to blues maestro Kelly to percussive genius Cobb interacting and reacting with peerless skill.
An audiophile favorite from the day it was issued, Kind of Blue takes on nirvanic sonic proportions via Mobile Fidelity's reissue. The expressive warmth, imaging clarity, frequency extension, and window-on-the-world breadth afforded by this new edition places music lovers right in the studio with the sextet. Close your eyes and, no matter how many times you may have heard it before, your experience will parallel that of the players that recorded these gems. Everyone shares in the excitement of not knowing what will happen and, as the music begins to lie out in front of you, you'll feel as if you've been whisked away to a jazz holy land.
Quintessential.
Musicians:
Miles Davis, trumpet, band leader
Julian "Cannonball" Adderley, alto sax (except on "Blue in Green")
John Coltrane, tenor sax
Paul Chambers, double bass
Bill Evans, piano (except "Freddie Freeloader")
Wynton Kelly, piano ("Freddie Freeloader")
Jimmy Cobb, drums
Miles Davis Kind of Blue Track Listing:
So What
Freddie Freeloader
Blue in Green
All Blues
Flamenco Sketches 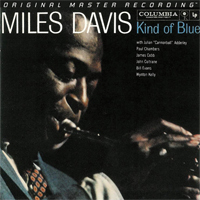 Fidelity believes that mastering systems should be neutral and transparent. The essential idea is to unveil all the detailed musical information on the original master recording without adding deterioration, coloration or other sonic artifacts.

It is worth noting that Mobile Fidelity Sound Lab stands out as one of few record labels that independently invests in research and development of audio technology. With proprietary innovations such as GAIN 2™, general music enthusiasts and audiophiles alike have reaped the benefit of a higher consumer audio standard without investing in costly new hardware. Mobile Fidelity is pleased to work with a variety of engineering legends and companies including Tim de Paravicini, Ed Meitner, Pass Labs, Theta Digital and Sony Electronics.

Our joint efforts to seek out the ultimate audio experience, has resulted in significant advances for the technology of music reproduction.

For over twenty years, Mobile Fidelity Sound Lab has continually searched for the ultimate audio experience. During this search MFSL engineers and associates created The GAIN™ System, a proprietary mastering technology which brought warmth and ambience to the compact disc format. A few years ago - with higher resolution formats on the horizon - the vision of GAIN 2™ began. As it stands today, GAIN 2™ is one of the greatest technical advancements in analogue and digital technology in the last ten years. It consists of a series of critical modifications and new components to Mobile Fidelity's proprietary mastering chain.

We feel that GAIN 2™ has come extremely close to meeting this goal. The key accomplishments of GAIN 2™ System are 1) the ability to extract all the musical information as possible through the Ultra High bandwidth analogue tape playback system with proprietary custom tape playback heads, reproducer electronics and 2) transparently capturing and storing that information with the Direct Stream Digital recording system.