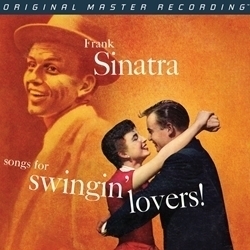 This is Sinatra, at or near the top of his game. He is right out front where he belong and the band is right with him all the way with Nelson as their very able guide.. It is in mono but that is not a negative factor, just buy this. 5/5 Sacdnet.

Fluid, Sweeping Milestone 1956 Set Arguably the Best Swing Album Ever Made Mastered from the Original Master Tapes: Mobile Fidelity Mono LP Captures Heft of Enthusiastic Orchestrations, Confidence of Sinatra’s Voice Includes Standard-Setting Renditions of “I’ve Got You Under My Skin,” “You Make Me Feel So Young,” “Pennies From Heaven”

Having endured a traumatic breakup and recorded his first “saloon style” concept album the year prior, Frank Sinatra returned with vivacious gusto on the aptly titled Songs for Swingin’ Lovers!, a light-on-its-feet set bursting with joyousness, pop, vitality, optimism, and finger-snapping promise. Indisputably one of the greatest swing efforts ever undertaken, it contains highlight-reel renditions of now-standards such as “I’ve Got You Under My Skin,” “You Make Me Feel So Young,” and “Pennies From Heaven.” The equivalent of a musical fountain of youth, the fluid material mirrors Sinatra’s confidence and enthusiasm, which nearly burst off the page. Mastered from the original master tapes, Mobile Fidelity’s numbered limited-edition SACD presents in mono this jubilant affair, eviscerating in transparency that rendered by the previous remasters and at least equaling the sonics of the extremely rare original 45RPM editions of the Capitol release. Akin to Mobile Fidelity’s other Sinatra titles, it’s the definitive pressing and one meant to be handed down to future generations. There’s every reason any music lover would yearn to be as close to the music on this record as possible. And in rendering the scope, scale, thrust, and peaks-and-valleys dynamics of the orchestra, not to mention the timbral richness and full extension of Sinatra’s impeccable singing, this pressing gives you a front-and-center chair to the sessions at the Hollywood studios. Rare is the album replete with the superb combination of contagious pitch-perfect singing, swaying tempos, life-affirming emotions, and breezy string arrangements exemplified here. Nelson Riddle’s scales climb to unforeseen heights, the rushing crescendos and twirling comedowns surging with power, persuasion, and pleasantry. At times, the strings and rhythm section threaten to overwhelm Ol’ Blue Eyes. Yet Sinatra, lighthearted and in great humor, is in such brilliant form, he matches the splendor and seems to invite Riddle to bring all he’s got. 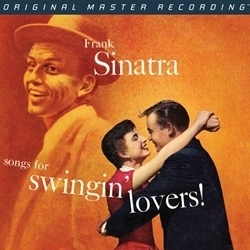