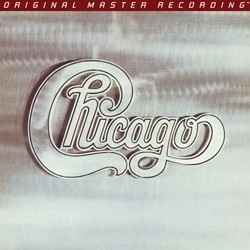 Chicago shortened its name on its second album but altered little else. Improving upon the creative synthesis shown on its debut, the ensemble ups the ante for pop, rock, and jazz fusion on its 1970 sophomore set, introducing classical signatures as well as a penchant to delve even deeper into unchartered waters. Ambitious arrangements and brazen interplay remain, yet further addition of multifaceted melodies and seamless syncopation finds the group stepping up its songwriting.Witness “25 Or 6 To 4” and “Make Me Smile,” smashes that resonated with the mainstream.

Mastered from the original master tapes, Mobile Fidelity’s hybrid SACD lavishes Chicago II with a clarity, transparency, and detail no previous digital edition has ever enjoyed. Pulling back the curtain on the recordings, this collector’s version exponentially expands the soundstaging dimensions, imaging proportions, and dynamic information, allowing the songs to breathe and enjoy a roominess that enhances the stellar performances and interwoven structures. In particular, the harmonic vocals naturally carry and possess lifelike decay, never in competition with but always in sympathy with the telepathic instrumentation. Yes, the sonics here are as good as gold.

As reflected by the 7-part, 13-minute “Ballet for a Girl in Buchanan” suite, Chicago II draws from classical as well as traditional rock and jazz influences in presenting an experience that eviscerates “disparate” when pertaining to musical styles. Paired amidst progressive rhythms, a surfeit of driving horns and gritty R&B vocals again affords the band the privilege of rocking as hard as any of their contemporaries. And yet, due to the collective’s diversity and prowess, Chicago also lends poignant sensitivity to ballads such as the prom favorite “Colour My World.”

The septet’s command of switching between aggressiveness and intensity, softness and sensuality, defines Chicago II. Such dichotomy is represented in the form of guitarist Terry Kath, a secret weapon whose contributions on Mobile Fidelity’s exquisite version emerge with newfound energy and emotionalism. Highlighted, too, are the group’s forays into thematic lyrics, with the politically barbed “It Better End Soon” and grim “Poem for the People” speaking to the record’s original dedication that states “With this album, we dedicate ourselves, our futures and our energies to the people of the revolution. And the revolution in all of its forms.” 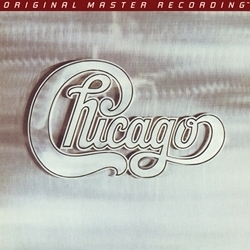 Mobile Fidelity believes that mastering systems should be neutral and transparent. The essential idea is to unveil all the detailed musical information on the original master recording without adding deterioration, coloration or other sonic artifacts.  It is worth noting that Mobile Fidelity Sound Lab stands out as one of few record labels that independently invests in research and development of audio technology. With proprietary innovations such as GAIN 2™, general music enthusiasts and audiophiles alike have reaped the benefit of a higher consumer audio standard without investing in costly new hardware. Mobile Fidelity is pleased to work with a variety of engineering legends and companies including Tim de Paravicini, Ed Meitner, Pass Labs, Theta Digital and Sony Electronics.  Our joint efforts to seek out the ultimate audio experience, has resulted in significant advances for the technology of music reproduction.  GAIN 2™ Mastering Technology for Ultradisc UHR™ Hybrid SACD and Ultradisc II™ 24kt Gold CDs  For over twenty years, Mobile Fidelity Sound Lab has continually searched for the ultimate audio experience. During this search MFSL engineers and associates created The GAIN™ System, a proprietary mastering technology which brought warmth and ambience to the compact disc format. A few years ago - with higher resolution formats on the horizon - the vision of GAIN 2™ began. As it stands today, GAIN 2™ is one of the greatest technical advancements in analogue and digital technology in the last ten years. It consists of a series of critical modifications and new components to Mobile Fidelity's proprietary mastering chain.  We feel that GAIN 2™ has come extremely close to meeting this goal. The key accomplishments of GAIN 2™ System are 1) the ability to extract all the musical information as possible through the Ultra High bandwidth analogue tape playback system with proprietary custom tape playback heads, reproducer electronics and 2) transparently capturing and storing that information with the Direct Stream Digital recording system