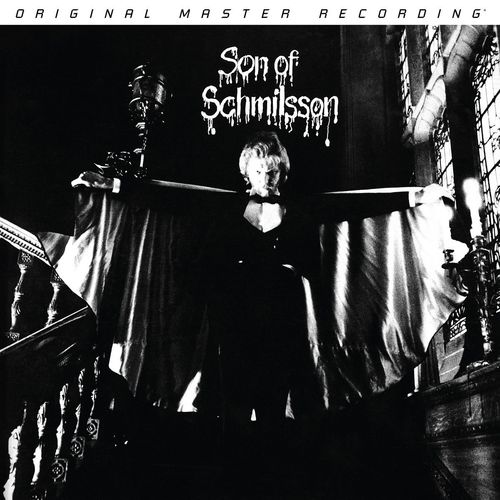 Half Speed Mastered by Kreig Wunderlich fromm the Original Mastertape

I sang my balls off for you baby." Harry Nilsson's bold proclamation on the opening track to Son of Schmilsson immediately makes it evident the singer had no intention to repeat the approach of his commercial breakout, the preceding Nilsson Schmilsson – and harbored no desire to hold back on any front or advance any traditional notion of a career. The madcap album goes all out, delivering a wild ride infused with horror-movie effects, crass jokes, then-shocking profanity, snoring, and even a belch – strangeness that belies the fact it went gold and landed a Top 40 single in the form of "Spaceman." Hindsight further shows the gonzo work endures as a stroke of defiant genius, ego-grounding facetiousness, and raucous fun – all the way down to the iconic artwork depicting Nilsson as a vampire.

Mastered from the original master tapes,  Son of Schmilsson presents the music with full-range dynamics and astute clarity. Recording with producer Richard Perry and at London's Trident Studios for the second time, the singer again captures a natural sound marked by lively tonalities, generous air, and stellar presence. All these aspects come to the fore with unprecedented degrees on this first-ever audiophile reissue of Nilsson's most controversial (and self-sabotaging) turn.

Listeners who prize separation and spaciousness are in for a treat. While Nilsson and Perry juggled everything from unusual percussion to horn sections to choirs and an orchestra, Mobile Fidelity's version of Son of Schmilsson never seems muddled or congested. The versatile array of instruments have room to breathe, while notes emerge with palpable immediacy and fade with realistic decay. It goes without saying that Nilsson's elastic voice projects with you-are-there resolution and transparency. Make no mistake: You'll hear exactly why the 1972 work continues to spark debate and persist as a fan favorite to this day.

Just look at the invited guests – the "cast," to quote text from the back cover – who participated in the merriment. George Harrison, Ringo Starr, Lowell George, Nicky Hopkins, Peter Frampton, and Bobby Keys join session pros such as Klaus Voorman, Ray Cooper, and Milt Holland stitching together arrangements that encompass rock, torch, country, pop, blues, and old-world European-styled sing-a-longs. Indulgent, certainly, yet always in the service of a singer-songwriter whose multifaceted aims and daring versatility speak to the lasting appeal, wit, and melodicism of the primarily upbeat fare.

Experiencing a painful divorce at the time, Nilsson crafted multiple "anti" love songs, none more memorable than the boogie-tilted "You're Breakin' My Heart" whose vulgar lyrics at the time were borderline scandalous. Its taboo nature, along with the brass-driven romp "Take 54" – about a groupie and the vocalist's lust, and the ditty prominently mentioning "balls" in the chorus – meant the record's two most radio-ready tracks couldn't be aired. Nilsson's combination in-joke and protest of convention, expectation, and hypocrisy carries over to "Joy," a delightful pastiche of country-and-western tropes that ultimately saw the light of day as an RCA single.

For sheer mayhem and lunacy, nothing tops "I'd Rather Be Dead" – an anthem replete with the declaration "I'd rather be dead/Than wet my bed" – taken to extremes by two choirs comprised of senior citizens who passed a bottle of sherry around in the studio. No topic or theme, not death, sadness, or loss, remains safe on Son of Schmilsson.

Yet the presence of the breathtaking piano ballad "Remember (Christmas)," mellifluous "The Lottery Song," and eloquent "Turn on Your Radio" reveal that underneath the bizarre disguises, off-beat humor, and intentional confusion, Nilsson identified as an inimitable tunesmith and singer whose particular blend of personality, approach, and vision would never again be seen. Son of Schmilsson, indeed.