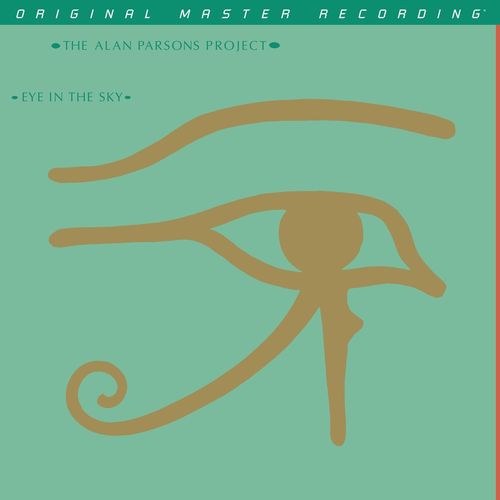 The opening track to the Alan Parsons Project's Eye in the Sky remains the most recognized instrumental in sports – fanfare inseparably tied with introducing NBA legend Michael Jordan and his six-time world-champion Chicago Bulls mates before games, and still used by many teams as an energy-raising prelude. Indeed, the subdued grandiosity, cosmic bluster, and lights-out wonder of "Sirius" also sets the table for the band's smash 1982 album, whose hallmark smoothness, lushness, and balance reach epic heights on Mobile Fidelity's collectible reissue.

Mastered from the original master tapes, this numbered hybrid SACD of Eye in the Sky features succulent warmth, magnificent balance, low-end heft, and see-through transparency that takes you into the studio with Parsons and creative partner Eric Woolfson at Abbey Road. Akin to Mobile Fidelity's meticulous restoration of Parsons and company's I Robot, this super-clean edition will test the full-range capabilities of the world's finest stereo systems. In sum, there's more information, more detail, more texture, more nuance – more of everything to be experienced.

Boasting front-to-back depth, concert-hall-level separation, realistic presence, and bang-on accuracy, Mobile Fidelity's SACD of Eye in the Sky illustrates the lasting importance of perfectionist-minded engineering and recording techniques. Few works possess such a mesmerizing blend of reference-setting sonics and commercial acumen, facets that helped earn the set a Grammy nomination for Best Engineered Album – and, more than 35 years after its release, a Grammy for Best Immersive Audio Album for its surround format. Parsons' track record – he sat behind the boards for the Beatles' Abbey Road and Pink Floyd's Dark Side of the Moon – speaks for itself. As do the performances throughout Eye in the Sky, which contains not a single dull moment.

Moving the overarching conceptual themes present on the group's other signature efforts to the background, Eye in the Sky uses a string of seamless melodies, hooks, and mood to draw and hold listeners' attention. It survives as Parsons' pop triumph, full of exquisite songwriting, dreamy emotions, and soft edges that parallel an underlying orchestral scope and prog-derived drama. For example, the string- and brass-laden "Silence and I" alone qualifies as a rhapsodic symphony. Credit for the music's craft, cohesiveness, and accessibility also falls to Parsons and Woolfson's knack for recruiting session pros that translate their visions with unquestioned emotion – particularly, the assembly of star vocalists that include Elmer Gantry ("Psychobabble"), former Zombie frontman Colin Blunstone ("Old and Wise"), and soul singer Lenny Zakatek ("You're Gonna Get Your Fingers Burned" and "Step by Step").

As with all Parsons releases, the arrangements proverbially dot every "i" and cross every "t." Each note seems perfectly placed, every sequence painstakingly considered. Not to mention the narratives to the surveillance-obsessed title track and pulsing "Psychobabble" carry more weight in the 21st century than they did in the early stages of the Reagan/Thatcher era. And, just as it begins, with an appropriate flourish announcing the catchiness that follows, the platinum-selling Eye on the Sky finishes with fitting sentimentality in the form of a spiraling, saxophone-led ballad ("Old and Wise") that could easily fit on Pink Floyd's Wish You Were Here.

3. Children Of The Moon

6. You're Gonna Get Your Fingers Burned

Mobile Fidelity believes that mastering systems should be neutral and transparent. The essential idea is to unveil all the detailed musical information on the original master recording without adding deterioration, coloration or other sonic artifacts.

It is worth noting that Mobile Fidelity Sound Lab stands out as one of few record labels that independently invests in research and development of audio technology. With proprietary innovations such as GAIN 2™, general music enthusiasts and audiophiles alike have reaped the benefit of a higher consumer audio standard without investing in costly new hardware. Mobile Fidelity is pleased to work with a variety of engineering legends and companies including Tim de Paravicini, Ed Meitner, Pass Labs, Theta Digital and Sony Electronics.  Our joint efforts to seek out the ultimate audio experience, has resulted in significant advances for the technology of music reproduction.  GAIN 2™ Mastering Technology for Ultradisc UHR™ Hybrid SACD and Ultradisc II™ 24kt Gold CDs  For over twenty years, Mobile Fidelity Sound Lab has continually searched for the ultimate audio experience. During this search MFSL engineers and associates created The GAIN™ System, a proprietary mastering technology which brought warmth and ambience to the compact disc format. A few years ago - with higher resolution formats on the horizon - the vision of GAIN 2™ began. As it stands today, GAIN 2™ is one of the greatest technical advancements in analogue and digital technology in the last ten years. It consists of a series of critical modifications and new components to Mobile Fidelity's proprietary mastering chain.  We feel that GAIN 2™ has come extremely close to meeting this goal. The key accomplishments of GAIN 2™ System are 1) the ability to extract all the musical information as possible through the Ultra High bandwidth analogue tape playback system with proprietary custom tape playback heads, reproducer electronics and 2) transparently capturing and storing that information with the Direct Stream Digital recording system.