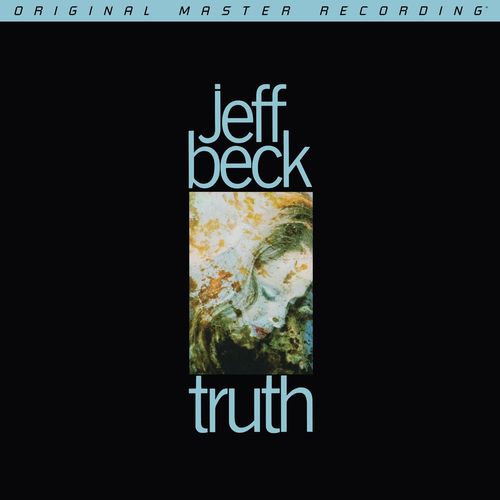 The core lineup – Jeff Beck, Rod Stewart, Mickey Waller, Ron Wood – responsible for the groundbreaking performances Truth alone qualifies as a watershed accomplishment. That the 1968 landmark predated and impacted Led Zeppelin's debut; involved members of Zeppelin, the Faces, and the Who; continues to be cited by many experts as the blueprint for hard rock; and unspools with indescribable guitar wizardry and primal energy put it into rarefied territory. Among the most influential sets ever released, Beck's solo debut has never spoken with more truth than on this exceptional reissue.

Mastered from the original master tapes and limited to 2,500 numbered copies, Mobile Fidelity's hybrid SACD puts you in Abbey Road and Olympic Sound Studios with the band. Free of the haze, thinness, and constrained nature of many prior editions, it presents the music with three-dimensional depth, revealing texture, and unmistakable liveliness. Just as crucially, and in line with Beck's request in the original liner notes, this audiophile release can be played loud without harshness and distortion. Truth is not for the fainthearted; it will help take your system to its limits.

Steeped in blues, swing, heaviness, and firepower, Beck's six-string voodoo pushed conventions and boundaries at the time – and still does now. As scribe Gene Santoro writes in his essay for Beckology, "The guitar may slash and burn or sigh an aching melody, blaze a fusillade or arc a lyrical air – but from the touch, the phrasing, you know it's him." And Mobile Fidelity's meticulously engineered reissue lets you identify Beck with unsurpassed certainty and intimacy. You can practically hear his fingertips on the frets while savoring the endless tones echoing from his notes, sustains, bends, glissandos, slides, and major and minor chords.

Of course, Beck's charismatic contributions aren't the only dramatically elevated features. Truth towers above nearly every other one of the British icon's records due to the cohesiveness of its songs and chemistry shared by the band members – as well as several choice guests. The full measure of Waller's foundation-busting percussive thunder, for example, can now be enjoyed without limitations. Ditto Wood's steadying rhythms, and the grit and grain present in Stewart's deliveries. The latter's fabled combination of ragged looseness, soulful shouting, and organic rasp first make their appearance on Truth – and would soon help him land his gig with the Faces, not to mention catapult him to global stardom.

Such commercial success may have eluded Truth, yet few platters remain more revered by listeners, critics, and fellow musicians. Considering it also involves Rolling Stones session/touring pianist Nicky Hopkins, Zeppelin guitarist Jimmy Page, Zeppelin bassist John Paul Jones, and Who drummer Keith Moon – and includes a roof-shaking rendition of Willie Dixon's "You Shook Me" that inspired Page, given Zeppelin included it on its debut months later – the sheer importance and scope of Truth cannot be over-exaggerated. Neither can the brilliance of the performances or inventiveness of Beck's approaches.

He slyly traces back to his days in the Yardbirds with an acrobatic rendition of "Shapes on Things" that opens the album and puts listeners on notice that things have changed. Slow, chilling interpretations of "Morning Dew" and "Ol' Man River" ache with regret. A solo acoustic version of the traditional "Greensleeves" conveys grace and delicacy, while Beck and company demonstrate they can turn on a dime the very next moment with "Rock My Plimsoul." And that's saying nothing of Beck's signature piece, the wordless "Beck's Bolero," a tense powder keg further ignited by Page and Moon, with the latter yelling halfway through and smashing the microphone, leading to what you can now hear in stellar clarity – a tidal wave of cymbals dominating the percussion.

By itself, the song justifies Truth, as does the seven-and-half-minute "Blues Deluxe," which stands up with any blues from any era, and showcases Hopkins' massive personality on the 88s. And lest we forget, Beck turns his guitar into a carnival of animal and human voices on "I Ain't Superstitious," with Stewart responding to every one. From start to finish, there's not a single lapse. And that's the straight truth.

Mobile Fidelity believes that mastering systems should be neutral and transparent. The essential idea is to unveil all the detailed musical information on the original master recording without adding deterioration, coloration or other sonic artifacts.  It is worth noting that Mobile Fidelity Sound Lab stands out as one of few record labels that independently invests in research and development of audio technology. With proprietary innovations such as GAIN 2™, general music enthusiasts and audiophiles alike have reaped the benefit of a higher consumer audio standard without investing in costly new hardware. Mobile Fidelity is pleased to work with a variety of engineering legends and companies including Tim de Paravicini, Ed Meitner, Pass Labs, Theta Digital and Sony Electronics.  Our joint efforts to seek out the ultimate audio experience, has resulted in significant advances for the technology of music reproduction.  GAIN 2™ Mastering Technology for Ultradisc UHR™ Hybrid SACD   For over twenty years, Mobile Fidelity Sound Lab has continually searched for the ultimate audio experience. During this search MFSL engineers and associates created The GAIN™ System, a proprietary mastering technology which brought warmth and ambience to the compact disc format. A few years ago - with higher resolution formats on the horizon - the vision of GAIN 2™ began. As it stands today, GAIN 2™ is one of the greatest technical advancements in analogue and digital technology in the last ten years. It consists of a series of critical modifications and new components to Mobile Fidelity's proprietary mastering chain.  We feel that GAIN 2™ has come extremely close to meeting this goal. The key accomplishments of GAIN 2™ System are 1) the ability to extract all the musical information as possible through the Ultra High bandwidth analogue tape playback system with proprietary custom tape playback heads, reproducer electronics and 2) transparently capturing and storing that information with the Direct Stream Digital recording system.