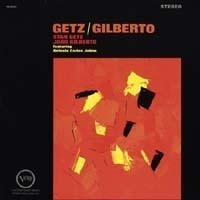 Acoustic Sounds/Universal Music Group has released a vibrant 180-gram stereo vinyl of Getz/Gilberto. Engineered by George Marino (Sterling Sound) under the supervision of Acoustic Sounds founder Chad Kassem, this is a vibrant analog update of a jazz essential The overall mix of this re-mastered 180-gram vinyl is excellent. The stereo separation is precise, with double bass/percussion on one channel and guitar/piano on the other. Getz’ distinctive tenor is centered, as are the vocals. In particular, the winsome, reticent voice of Astrud Gilberto gets a significant boost. The packaging is top-notch with hi-gloss gatefold, reinforced plastic sleeve and the eye-popping cover painting by abstract expressionist Olga Albizu. The pressing is superior 5/5 Audiophile Audition

. To me, there are subtle differences. Listening to 'The Girl from Ipanema,' I hear a slightly more focused, precise sound on the new Acoustic Sounds LP. The stereo separation is a bit extreme, as it was on the original: I would have changed that. Familiar though it is, and successful though it was, the music remains marvelous. It's wonderful to relive the heft and forthright mastery we hear on Getz's solos throughout." — Michael Ullman, The Arts Fuse

"We're very honored to have Verve and UME partnering with us to create what we believe will be the highest quality reissues of some of the world's greatest jazz albums. Each step in our production process — from title selection to mastering, pressing and packaging — is designed to meet the highest standards, and we want everyone who hears these albums to feel the love and hard work we put into everything we do," Kassem said. "We've long had a great relationship with UME, pressing classic titles at our Quality Record Pressings from many of their highest-profile artists. We look forward to strengthening that partnership even further with these reissues from Verve, home of the world's largest jazz catalog."
Getz/Gilberto is not only a marvelous album, but one which had a profound influence upon the face of jazz and American popular music. This stunning 1964 collaboration between Stan Getz, one of the most popular and respected tenor saxophonists of the era, and the remarkable Brazilian guitarist João Gilberto, launched the bossa nova craze and the career of João's wife Astrud Gilberto with the hugely popular and iconic hit song, "The Girl from Ipanema (Garota de Ipanema)." Even more impactful, it introduced the famed Brazilian composer Antonio Carlos Jobim to the English-speaking musical world. In addition to playing piano on the album, Jobim also composed six of the eight compositions, including two of his most popular masterpieces, "Desafinado" and "Corcovado," along with the aforementioned "Garota de Ipanema."
While Getz had embraced the music of Brazil prior to this with two outstanding Verve albums — Jazz Samba and Big Band Bossa Nova — Getz/Gilberto, with multiple Grammy Awards and a permanent place on various Best Albums of All-time lists is the album that launched a revolution. Regardless of that, the collaborative blending of Getz's fluid, muscular virtuosity and João's impeccable acoustic guitar stylings and captivating vocals, Astrud's enchanting almost-whispered singing on two tracks, all backed by Jobim's minimalist subtlety on piano and the flawless support of Sebãstio Neto and Milton Banana on bass and drums, make this an utterly momentous musical experience regardless of its lofty place in musical history.
Musicians: Stan Getz, tenor saxophone Joao Gilberto, guitar, vocals Antonio Carlos Jobim, piano Tommy William, bass Milton Banana, drums Astrud Gilberto, vocals
Side 1
1. The Girl From Ipanema
2. Doralice
3. Para Machuchar Meu
4. Desafinado
Side 2
1. Corcavado
2. So Danco Samba
3. O Grande Amor
4. Vivo Sohando