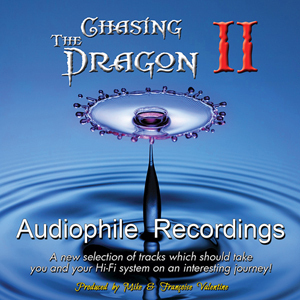 180 Gram Audiophile Demonstration & Test Disc! A treat to listen to, a great way to test and show off your system!

A selection of tracks which should take you and your Hi-Fi system on an interesting journey.

The first album Chasing The Dragon ever released was a collection of audiophile recordings. Many friends have asked when they would be releasing a 2nd album of audiophile recordings. After recording many new tracks, as well as adding a small selection from recent albums, Chasing The Dragon presents to you Chasing The Dragon II. The organ recording has enough bass to rattle not only your speakers, but also your neighbor's teeth! Also included is a comparison track between a 60 year old valve microphone, which is used for all CTD recordings, and a modern high quality transistor mic. The differences which you can clearly hear, are very interesting.