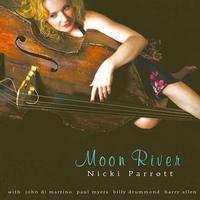 "She doesn't showboat as a singer, opting to glide gently around the core of each melody, with a light, swinging style that proves highly effective." — AllMusic
Australian-born and New York-based Nicki Parrot is a double threat: She can play the bass very competently, and has a singing voice that shares the relaxed sexiness of Julie London and the coquettishness of Blossom Dearie. She has performed and recorded with the legendary guitarist Les Paul, pianist Rachel Z, and her sister, Lisa Parrott.
Venus' producer Tetsuo Hara got to know Parrott when he recorded the Rachel Z band which she was a part of. For this auspicious label debut release, Parrott was teamed with wonderful musicians that include John di Martino, a wonderful pianist and arranger who has recorded several times for Venus. Paul Myers' guitar work is exemplary, and Harry Allen contributes with tasteful solos and obligatos.
As Jay Leonhart often says, many people believe it's impossible to play the jazz bass and sing at the same time. But Parrott, together with Kristin Korb on the West Coast, proves them wrong. This is a very enjoyable, straight ahead jazz album with great singing and strong performances throughout.
Mixed and mastered by Tetsuo Hara
Venus Hyper Magnum Sound Direct Mix Stereo
Obi strip
Japanese pressing
Musicians:
Nicki Parrott, vocals, bass
Harry Allen, tenor sax
John Di Martino, piano
Paul Myers, guitar
Billy Drummond, drums
Side A:
1. Moon River
2. Is You Is Or Is You Ain't My Baby?
3. Say It Isn't So
4. You'd Be So Nice To Come Home To
5. Cry Me A River
Side B:
1. Takin' A Chance On Love
2. I Don't Know Enough About You
3. Makin' Whoopee
4. What A Difference A Day Made
5. Besame Mucho
Browse this category: JAZZ
Contact information
Nicki Parrott - Moon River - 180g LP - SCOTT NANGLE AUDIO
T&C's and Privacy Policy