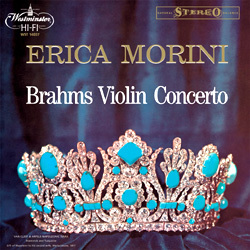 When one considers that Erica Morini’s 60-year career on the concert platform brought her together with such orchestras as the Leipzig Gewandhaus Orchestra and the Berlin Philharmonic and took her as far as New York’s Carnegie Hall, the number of recordings she left us is very small indeed. In order to obtain an idea of this violinist’s great talent, which she developed to perfection as one of the very first women to attend the Vienna Conservatory, it has generally been necessary to delve into the shellac record archive. And of course, such records crackle and hiss, thus ruining the listener’s pleasure. But now here is the remedy: a stereo recording of Brahms’s Violin Concerto which the 61-year-old Erica Morini recorded for the Westminster label.
Her clean and highly differentiated timbre, her lyrical expression, technical perfection, and of course her very own thrilling esprit is marvellous to hear.
No matter whether the absolute Brahms fan tucks this LP under his pillow at night, or the collector stows it away in his cupboard, or even better lets it spin around on the turntable, this LP remains invaluable for its documentary and artistic value.
Erica Morini’s 60-year career included concert performances with leading orchestras such as the Leipzig Gewandhaus and Berlin Philharmonic but regrettably she made few recordings. It’s a rare pleasure, therefore, to hear this supreme violinist at her finest in this stereo recording of Brahms’s Violin Concerto in D major, which the 61-year-old Morini made with the Philharmonic Orchestra, conducted by Artur Rodzinski.
It was recorded in 1956 at Walthamstow Assembly Hall in London for the Westminster label and clearly demonstrates the performer’s clean and highly differentiated timbre, lyrical expression, technical perfection, and the thrilling passion that was her trademark. This outstanding LP is one the collector will treasure for its documentary value and which the music-lover will appreciate for its insight into the work of an artist of real musical integrity.
Musicians: Philharmonic Symphony Orchestra of London conducted by Artur Rodzinski; Erica Morni, violin.
Selections:
1. Violin Concerto in D Major, Op. 77
September 1956  Walthamstow Assembly Hall, London,  Herbert Zeithammer
Production: Dr. Kurt List