Categories ELECTRONICA & INDIE Prodigy - The Fat of the Land - 2LP 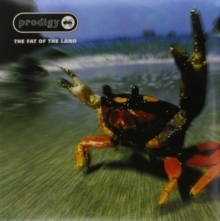 Fierce rave-into-hardcore collective that became one of the best-selling dance acts ever thanks to the incendiary "Firestarter."

Few albums were as eagerly anticipated as The Fat of the Land, the Prodigy's long-awaited follow-up to Music for the Jilted Generation. By the time of its release, the group had two number one British singles with "Firestarter" and "Breathe" and had begun to make inroads in America. The Fat of the Land was touted as the album that would bring electronica/techno to a worldwide audience (Of course, in Britain, the group already had a staggeringly large following that was breathlessly awaiting the album.) The Fat of the Land falls short of masterpiece status, but that isn't because it doesn't deliver. Instead, it delivers exactly what anyone would expect: intense hip-hop-derived rhythms