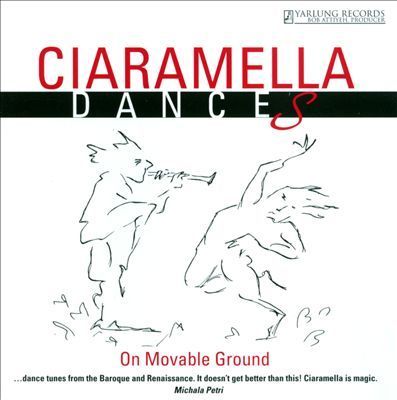 There are not many 45 rpm vinyls around today, and this format – though it requires getting up more often and extra expense – is probably the pinnacle of analog sonics today.  And it’s a 180 gram audiophile pressing. The imaging and general performance quality is top notch. The sounds are strong on recorders and shawms, and the clarity is quite amazing. Strongly recommended to all early music fans with good turntables. Sound 5/5 AudiophileAudition
The sonics are astonishing and the Pallas pressing dead quiet. Quite simply, if you want to know how good your stereo can possibly sound, get this short, but delightful record
Sound 11/10 Music 9/10 Michael Fremer analogplanet
CIARAMELLA DANCES ON MOVABLE GROUND
Ciaramella Ensemble ventures "toward modern times" with intoxicating dance melodies from musicians who lived from the 1500s into the Baroque era, and includes new compositions by Adam Gilbert as well.  Ground bass patterns underlie all of this music; sometimes one can hear it clearly and sometimes the ground bass line is veiled within the polyphony.  Ciaramella artistic directors Adam and Rotem Gilbert lead the ensemble, which includes music on theorbo, Baroque guitar, viola da gamba, drums and percussion, harpsichord, wind instruments (including recorders, Renaissance brass, shawms), and hurdy gurdy.
"...Ciaramella plays this music with conviction and expressiveness and makes it accessible for contemporary audiences. One certainly can’t ask for more.
"...Ciaramella makes it fun. They bring a sense of history to the works they play, but their concerts aren’t dry academic exercises. They bring the music of the renaissance to life. A concert by Ciaramella is a delightful and entertaining excursion to a bygone era.
"And the... members of the group obviously enjoy what they’re doing. For them this music is as much alive today as it was in Richard III’s time – and that attitude and approach are what set them apart from many other early music ensembles."
Edward Reichel
“From the nobility of Europe, to the petit bourgeoisie reading Thonoit’s Arbeau’s Orchesographie, to the already pregnant bride in Brueghel’s The Peasant Wedding, everybody danced their way through the rituals of life…. Their music, like their dance, reflected a delicate balance between the restraints of culture and convention, and ingenious flourishes of improvisation….”
Adam Gilbert

The short signal path wired with five foot long custom, stranded silver interconnects, features custom Elliot Midwood-designed vacuum tube preamplifiers and no mixer. The cut from the original tape at 45rpm by Bernie Grundman uses no compression or limiting. Grundman went the “extra mile”, bypassing his board and cutting the lacquer directly from the tape playback deck’s output.

So guess what? The sonics are astonishing and the Pallas pressing dead quiet. Quite simply, if you want to know how good your stereo can possibly sound, get this short, but delightful record (if the woodwinds "break up", blame your turntable, not the recording or pressing)! Sound 11/10 analogplanet.