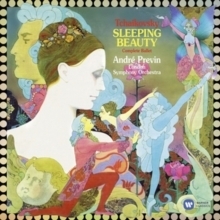 Sleeping Beauty is the third and last Tchaikovsky ballet to be re-released on LP in the famous versions by André Previn and LSO, after Nutcracker in 2016 and Swan Lake in 2017, which are among our best selling LP titles.

This reissue uses the iconic packshot and back illustrations made by Dick Ellescas for the three ballets when they were originally released.

First performed by the Russian Imperial Ballet at St Petersburg in 1890, Sleeping Beauty was a crowning achievement for Tchaikovsky and the choreographer Marius Petipa, although its stature was not fully recognised until some time later. It has since become a repertory classic of most major ballet companies around the world.