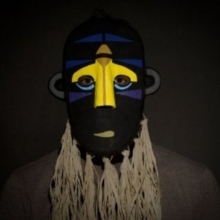 BBC Review
SBTRKT made his name hiding behind a mask, remixing the likes of M.I.A., Basement Jaxx and Modeselektor. And here, he’s kept the veneer while doing somewhat of a showy back-flip – by bringing in an A-grade line-up of guest vocalists, he’s given his own music the stage and produced a debut album almost unbelievably bursting with ground-zero moments, unexpected side-turns and slinky promises. This set packs the kind of hustle biologically required to (hopefully) scale the charts and explode into new places.