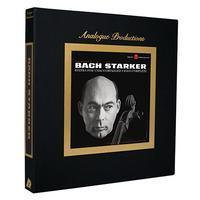 After receiving the final package, I am so proud of this product! I knew we hit a home run sound-wise when I heard the test pressings, but this packaging is super-deluxe and well manufactured, a whole other level. The production pressings are as good as the test pressings. This is just what you want in an all-analog vinyl reissue: superb sound and a collector-grade physical artifact. Great craftsmanship all around!" — Thomas Fine, remastering supervisor

Plated and pressed at Quality Record Pressings, makers of the world's finest-sounding LPs!

Thomas Fine made the 3-2 mixes with mastering engineer Ryan K. Smith at Sterling Sound's new facility in Nashville, Tennesee. Smith manually controlled groove margin and depth on his Neumann VMS-80 lathe, working with no preview signal and bypassing the lathe's margin-control computer. In doing so, he cut these sides the same way the original LP was cut by George Piros, who was Fine Recording Inc's VP and head of mastering. As with the original LP, no "sweetening" equalization or dynamic range control was used.

The definitive recording and perrformance of these works by JS Bach was originally released as a 3LP Mercury Living Presence Stereo SR3-9016, original mint copies of which command hundreds of dollars on the preowned LP market. Hungarian-American cellist János Starker epitomized refined elegance and superbly subtle bow work. Starker, who died in April 2013, was one of the 20th century's most renowned cellists.

Starker's recording of the Suites from 1965 makes a lasting impression on the listener, and even record producers who are well used to recorded excellence have been highly impressed. Starker's full-bodied sound and technical brilliance are complemented by his finely chiseled interpretation that lends immense expression to Bach's thrilling harmony and verve to the strict rhythmic construction of the movements.

This 6LP set, cut at 45 RPM, allows for the full dynamics present on the master tapes to shine through masterfully, as the wider-spaced grooves across the six sides, instead of three, let your stereo cartridge track more accurately. Housed in a glossy lid-style box reproducing the original artwork. Plated and pressed at Quality Record Pressings, makers of the world's finest-sounding LPs.