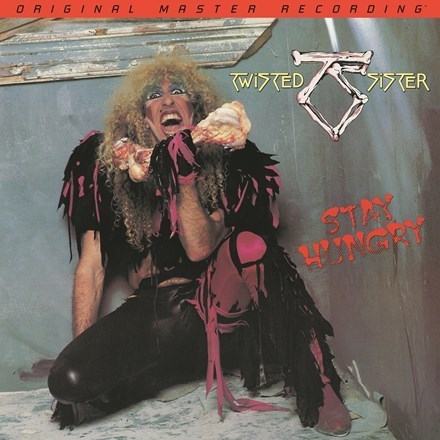 Mastered by Kreirg Wunderlich  from the Original Master Tape at MFSL

Mastered from the Original Master Tapes, Pressed at RTI, and Limited to 3,000 Numbered Copies: Mobile Fidelity 180g LP Plays with Openness and Let-Your-Hair-Down Energy
You wanna rock. And rock is what Twisted Sister does without compromise on Stay Hungry, an album that soon after its release became a leading symbol in the much-controversial fight against the Parents Music Resource Center (PMRC). Filled with good, clean fun, hard-rock ferocity, and laser-focused purpose, the triple-platinum effort receives deluxe treatment befitting one of the most iconic records of the 1980s courtesy of Mobile Fidelity.

Mastered from the original master tapes, pressed on 180g vinyl at RTI, strictly limited to 3,000 numbered copies, and issued in honor of the record's 35th anniversary, the audiophile label's reissue of Twisted Sister's signature work arrives custom-made for turning up the volume, letting your hair down, and embracing a freedom connected with carefree summers. If you've forgotten the instant emotional rush that comes from the sheer power of blustery guitar chords, in-your-face percussion, and the rousing menace of no-holds-barred vocals, Stay Hungry will instantly remind you there's no substitute for raise-your-fist-and-yell energy. Equally important, Mobile Fidelity's analog version proves the music goes well beyond the intentionally cartoonish humor of the popular MTV-aired videos associated with the hit songs.

Removed of prior veils and translucent artifacts, the record now breathes with an airiness, clarity, and openness that places the performances on a defined stage augmented with arena-sized amplification. Bass and drums take on far greater weight, impact, and size. Tones are crisp and possesses attack and bite. The compression that once suppressed the boisterousness, boldness, and bigness of Dee Snider's singing has disappeared. Far from a set simply intended for clinical listening, this definitive-sounding edition does everything but slip a patch-adorned denim jacket over your shoulders and encourage you to skip out on work (or math class).

The culmination of more than a decade spent paying dues in small clubs in New York and New Jersey, Stay Hungry survives as a testament to old-school band chemistry and never-say-die ambition. As Twisted Sister's third album, it showcases a refined style that balances rebellious rawness with mainstream-friendly touches in the form of catchy melodies, shout-it-out-loud choruses, and simple albeit effective themes. Unlike many of the hair-metal records with which it remains mistakenly associated, Stay Hungry never pretends or postures. There's not a fake moment in sight.

The opening title track spells out the group's intent and attitude from the start, with the overt references to desperation, dreams, desires, strength, and passion drawing a clear line in the sand – and shunning has-beens, tiredness, sympathy, and weakness. Such sentiments are furthered by "We're Not Gonna Take It," an unforgettable call-to-arms anthem still heard ‘round the world on radio stations, at sporting venues, and in the minds of anyone needing a shot of perseverance. The Top 40 single also achieved fame for its inclusion on PMRC's Filthy 15, a list targeted for alleged obscenities – and deemed by censorship proponent Tipper Gore as music that required content-based ratings. The other smash on Stay Hungry, "I Wanna Rock," spills forth with similar assertiveness and defiance, its appeal heightened by memorable group chants and motorcycle-engine-revving riffs.

Indeed, nearly every note on the 1984 breakthrough – be it the Stephen King-inspired "Horrorteria" suite, the pure metal drive of the title track, or the intimidating, clenched-teeth thrust of "Burn in Hell" – owes to a seasoned work ethic and nonconformist instinct that confirm Twisted Sister walked the talk like few other bands of its era. Even the sole power ballad, "The Price," marches forward with a dedicated resolve that shows why Gore and company were frightened: This is an album that couldn't, and still cannot, be stopped.

Experience the historic record in the highest fidelity it has ever enjoyed and pour over the iconic album cover in all its glory via Mobile Fidelity's 180g LP.

Stay Hungry
We're Not Gonna Take It
Burn in Hell
Horror-Teria (The Beginning): A) Captain Howdy B) Street Justice
I Wanna Rock
The Price
Don't Let Me Down
The Beast
S.M.F.

RTI 180 HQ Vinyl
Record Technology is a world class record pressing plant located in Camarillo, California. We have been operating since 1974, pressing for most audiophile record labels and for many quality minded independent and major record labels from around the world.
Browse this category: ROCK & POPULAR
Contact information
ROCK & POPULAR - SCOTT NANGLE AUDIO
T&C's and Privacy Policy