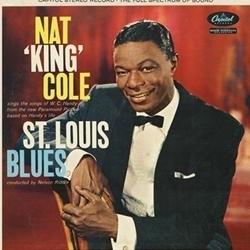 This the the gold standard for SACDs. I have shared this with many people and they are all blown away - Sacdnet

Mastered by Steve Hoffman and Kevin Gray from the Orginal 3 Track Mastertapes.

Casting early 20th Century works by "the Father of the Blues" with particularly smooth vocals by Nat King Cole and the resourceful orchestrations of Nelson Riddle resulted in this classic 1958 album, a worthy tribute to the W.C. Handy legacy.

Never before has this record sounded so rich, with every detail and nuance restored in a manner that places you in the recording studio with Cole. Mastered from the original three-track analog master tapes at Acoustech by Steve Hoffman and Kevin Gray for an unparalleled sonic experience. In addition, the SACD layer features the full overture restored in mono for the first time since 1960.

“This means you will be able to hear the real deal plus a surround and stereo mix of these legendary albums. By real deal I mean the close-miked mono creation, done live in Capitol Tower Studios A & B along with the "upstairs" control room creation, the stereo versions with a different set of microphones and parameters. This is very exciting to me. These mono versions have been out of print since the 1960's and we will use the original mono reels, mastered flat to DSD via the awesome Grimm A/DSD converter." - Steve Hoffman, describing the mastering process

"...if you haven't picked up every one of the Blue Note and Nat King Cole reissues from Chad Kassem and company at Acoustic Sounds, you're really missing out!" - David W. Robinson, Positive Feedback, Issue 52

This has been a totally no-expenses-spared project. Using the original three-track work tapes from Capitol's vaults, mastering engineers Kevin Gray and Steve Hoffman along with DSD specialist Gus Skinas bring you an entirely incomparable SACD experience. In addition to the stereo mixes, this SACD includes a three-track transfer for multichannel playback and the original mono mix taken from separate microphone feeds, mixing consoles and tape machines at the original sessions. In order to master from the three-track masters, AcousTech had to be outfitted for three-channel playback. That meant Kevin Gray had to find a third identical monitoring channel chain (including mixing board, amplifier and speaker) as well as a three-track playback headstack and also a three-track preview head for the vinyl cutting system.  It was a massive assignment. We've spent a fortune to include these extra bells and whistles and to make this a truly historic reissue.

An influential figure in the early 20th century development of blues and popular music as a music scholar and the composer of numerous popular songs, William Christopher Handy has often been called "the Father of the Blues." When two of the finest and most popular of mid-20th century musical figures, jazz and popular music icon Nat "King" Cole and style setting arranger extraordinare Nelson Riddle, undertook an album dedicated to the music of W.C. Handy, the results were at once a worthy tribute and transformative. Particularly smooth vocals by Nat King Cole were aptly backed by resourceful orchestrations from Nelson Riddle. From the landmark laments of "St. Louis Blues" and the loving appreciation of "Morning Star" on through to the colloquial rag of "Joe Turner's Blues," the varied facets of Handy's songs were given a lastingly freshened interpretation. Along with the contemporary Louis Armstrong Plays W.C. Handy  this album is considered by many to be the best anthology of the music of W.C. Handy.

For this deluxe hybrid SACD, both mono and stereo versions are available in standard resolution on the CD layer and in high resolution on the DSD stereo layer, while the stereo versions are also available in high resolution 3-channel sound on the DSD multi-channel layer. Both mono and stereo versions feature the opening "Overture/Hesitating Blues" medley restored to its original full length. In addition a 1,600-word essay by Jordan Taylor about the album is included. No expense was spared to make this the ultimate digital version of this album and a historic reissue