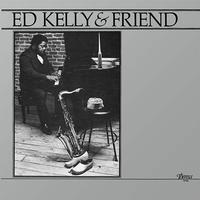 Both Kelly and Sanders interact seamlessly as they weave around this familiar melody. Kelly’s refined performance is unusually perceptive and may be the exclamation point on his adroit skills. Sanders injects a hint of “free jazz” near the end of the song.Pure Pleasure Records has done their customary superior re-mastering to 180-gram vinyl. The overall sound mix is balanced with excellent stereo separation. This is a great jazz album!  Sound 4.5/5 Audiophile

Ed kelly's friend is actually Pharoah Sanders and the LP features two of his famous compositions "You've got to have Freedom" and 'Newborn'.

Pharoah Sanders seems to be somewhat ignored by many lovers of jazz. Some of his work on Impulse can be abrasive and difficult and, since he emerged in the mid-1960’s he doesn’t have the hard bop pedigree that some insist on. That is their loss. Ed Kelly and Pharoah Sanders has been a great find and if you want a good introduction to this great saxophonist it may be a suitable springboard for you.

Ed Kelly shows a talent that could have enabled him to have made his name on the international stage. However, he chose family life on the West Coast over potential fame in New York and was a professor of Music at Laney College, Oakland for 27 years before his untimely death aged 69 in 2005

In 1978 Pharoah Sanders went into the studio with pianist, Ed Kelly, who was an important figure in the local San Francisco and Oakland jazz scene. The two of them recorded six tracks which ranged from covers of standards, through soul jazz through to two real gems. The album was originally released as Ed Kelly and Friend due to Pharoah being contracted to Arista Records at the time. Indeed, as you can see, the cover shows Kelly playing next to Pharoah's hat, shoes and Selmer tenor saxophone.

"Rainbow Song", a Kelly composition, opens matters in a manner far removed from Pharoah's work on his Impulse albums (although there had been a dramatic change of course when he signed with Arista and recorded). This is firmly in Grover Washington Junior territory with a liberal sprinkling of oh so tasteful strings. The Master's sound is full and mighty as ever.

With the radio track out of the way it is business as hoped for and "Newborn" is a Sanders composition that burns with intensity. The power of his solo is as good as anything he has produced and he runs over the full span of the tenor's range and onwards into territory lesser known or explored by 99% of sax players.

Sam Cooke's "You Send Me" is treated with reverence and respect, with Pharoah delivering a sensitive and heartfelt rendition and ending with some extraordinary phonics, which we will meet again on later albums. Kelly's accompaniment complements Sanders' playing before he receives his own space for a shimmering yet restrained solo which discloses what this non-pianist assumes to be an agile right hand.

"Answer Me My Love" is an early 50's ballad with a fascinating back story. On its initial release in post-war Britain, covers of this fine melody stirred sufficient controversy for the song to be banned by the BBC. What led to it being barred from broadcast on the Light Programme and treated like Anarchy For The UK, Wet Dream and Give Ireland Back To The Irish? I can reveal that the reason for this draconian action was that the original version was entitled "Answer Me, My Lord". In the olden days, it seems that a direct appeal to God was considered to be blasphemous- especially if set in a secular or selfish. Further research indicates that Nat King Cole made the most celebrated recording and that Bob Dylan used to sing it live in the 1990's, presumably during his overtly Christian phase. Anyway, it is a grand tune.

Pharoah went on to record at least three studio versions of his great anthem "You've Got To Have Freedom" but the one here is the earliest incarnation that I am aware of. It is also the most restrained treatment of the theme, although Pharoah's solo shows his ability to play with fire and power over the entire range of the horn. There's plenty of space for Kelly's piano too and he provides an elegant setting for Sanders' exploratory work

Musicians
Pharoah Sanders saxophone
Ed Kelly piano
Peter Barshay bass
Eddie Marshall drums
Side A:
1. Pippin
2. Answer Me My Love
3. You've Got To Have Freedom
4. Sweet Georgia Brown
Side B:
1. Rainbow Song
2. Newborn
3. You Send Me