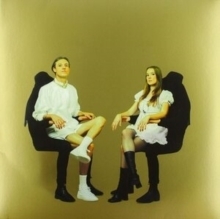 The party doesn't stop on Confidence Man's irrepressibly upbeat debut Confident Music for Confident People. The Australian quartet -- fronted by duo Janet Planet and Sugar Bones and backed by synth man Reggie Goodchild and drummer Clarence McGuffie -- do not relent over the course of 11 pulsating dance anthems, infusing each one with a heavy dose of campy, tongue-in-cheek fun like predecessors Scissor Sisters, Fischerspooner, LCD Soundsystem, and CSS.

Taking additional cues from late-'80s and early-'90s club kids like Tom Tom Club ("Bubblegum") and Deee-Lite ("C.O.O.L. Party"), they focus on addictive rhythms, pulsing beats, and deceptively simple lyrical earworms, hypnotizing like raving snake-charmers. Much of the group's allure is owed to their vocalists, who trade lines in a fashion that resembles a neon-washed update of Scissor Sisters' Jake Shears and Ana Matronic. On her own, Janet Planet is a scene-stealer, nonchalantly tossing out outrageous lines about boring boy-toys ("Boyfriend [Repeat]" and "Better Sit Down Boy") and wild shindigs where she once saw someone stick a light bulb where it didn't belong ("C.O.O.L. Party").

Meanwhile, Sugar Bones marries the deliveries of both Shears and LCD Soundsystem's James Murphy, most notably on the winking "Don't You Know I'm in a Band," the joyous closer "Fascination," and the throbbing, Fatboy Slim-indebted "Catch My Breath." From the synth drone and beat-pop on opener "Try Your Luck" to the disco glam rave-up of "All the Way," it's clear that Confidence Man have just one goal in mind: A sweaty, physical response to this throbbing, inspirational ear candy. Even if listeners lack that namesake self-assurance that the band seem to care so much about, by the end of Confident Music for Confident People, they might believe they can achieve anything with this album as their effortlessly cool soundtrack.

try your luck
don't you know i'm in a band
boyfriend
c.o.o.l party
out the window
catch my breath
bubblegum
better sit down boy
sailboat vacation
all the way
fascination