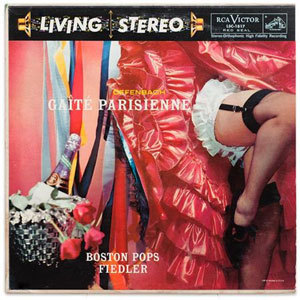 "These records are definitive." — Michael Fremer, editor, AnalogPlanet.com Winner of a Gruvy Award, chosen by AnalogPlanet's editor, Michael Fremer, for vinyl records that are musically and sonically outstanding and are also well mastered and pressed.

So far, Analogue Productions' series of outstanding reissues have avoided the missteps of the previous Classic Records issues, instead offering real improvements over the originals. … The latest release, of this title and the Offenbach Gaite Parisienne (LSC 1817), keeps a perfect track record of outstanding Living Stereo releases by Analogue Productions. Pristine surfaces and better-defined layers of sound along with much finer texture add up to a wonderful experience of the famous Organ Symphony. The original is almost coarse sounding compared to this reissue. While the Offenbach reissue does not eclipse the original in all areas, the original remains very expensive and the reissue is superb.” Recording = 10/10; Music = 10/10 — Dennis D. Davis, Hi-Fi +,

Very lively French light orchestral favorites. Considered by some to be the best RCA recording of all! Recorded June 1954 in Boston Symphony Hall, Arthur Fiedler conductor and the Boston Pops Orchestra performing. Fiedler's performance of Offenbach's Gaite Parisienne combines delightfully lyrical music with spectacular sonics to create and unforgettable listening experience. The fabled acoustics of Boston's Symphony hall and the magnificent tonal hues of the Boston Pops are on full display on this fanciful and festive recording.

Gaîté Parisienne (literally, "Parisian Gaiety") is a ballet choreographed by Léonide Massine to music by Jacques Offenbach orchestrated by Manuel Rosenthal in collaboration with Jacques Brindejonc-Offenbach, the composer's nephew. With a libretto and décor by Comte Étienne de Beaumont and costumes executed by Barbara Karinska, it was first presented by the Ballet Russe de Monte Carlo at the Théâtre de Monte Carlo on 5 April 1938.

"...I'd have to say that the usual stumbling blocks have been sidestepped. Great care has been taken to do the right things, starting with the way the decision to remaster these RCAs was made." - Jonathan Valin, The Absolute Sound  Pressed at Quality Record Pressings Plated by Gary Salstrom Mastered by Ryan Smith at Sterling Sound Musicians: 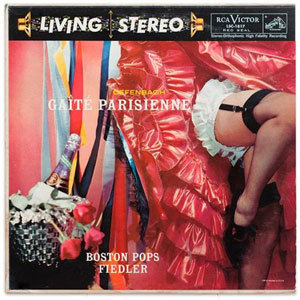