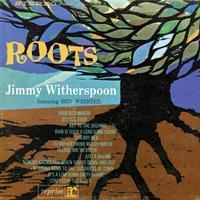 "... Kudos to blues lover Chad Kassem for recognizing the sonic pearl hiding behind a good but not stellar original recording. Kevin Gray at Cohearent Audio has proven yet again why vinyl rules the audiophile universe. Compared to a white label promo original, this issue is a quantum leap improvement, with three dimensional images and a big fat sound to die for." Recording = 10/10; Music = 10/10 — Dennis D. Davis, Hi-Fi +, Issue 84

"When the line below the artist's name says 'featuring Ben Webster,' and even if the artist is a bluesman to the core, you know there will be jazz inflections. If anyone was able to show that the to genres are inextricably linked, it's Witherspoon, who could take material by Bill Broonzy and make it sound like it was filtered through Count Basie. ... you'll be torn between filing it with blues or jazz. Buy it for one of the finest interpretations ever of 'Key to the Highway.'" — Sound Quality 90 percent — Ken Kessler, Hi-Fi News, November 2012

Somehow this 1961 Reprise title seems to have escaped the audiophile must-have list. It's a true hidden classic and an incredibly warm recording. The small combo setting really allows these two heavyweights to shine. The mood is laid-back and down-home. Accompanying musicians include trumpeter Gerald Wilson, pianist Ernie Freeman, bassist Ralph Hamilton and drummer Jim Miller. Roots was recorded at the often underrated or forgotten Radio Recorders in Hollywood, California. The studio, built in 1929, was one of the truly great - and great-sounding - studios of its day with an unbelievable discography of classics to its name.

Includes "Nobody Knows You When You're Down and Out" and "I'm Gonna move To the Outskirts of Town".

Jimmy Witherspoon made his first records with Jay McShann's band in 1945. Four years later, he would record under his own name with the McShann band and produced his first hit "Ain't Nobody's Business".

Jimmy Witherspoon laid out two great records in 1962 on Reprise, Spoon and this one. Roots places the great blues singer and guitarist in the company of saxophonist Ben Webster, trumpeter Gerald Wilson, and a rhythm section consisting of pianist Ernie Freeman and drummer Jim Miller. The mood is laid-back, down-home, and full of emotion and sentiment. The warmth of Witherspoon's voice on material like "Your Red Wagon," "I'd Rather Drink Muddy Water," "Key to the Highway" (in one of the more unique versions ever recorded), and Jimmy Rushing's "Did You Ever" is on the other side of lonesome. Webster and Wilson underscore the sung lines with fills that accent the deep blue in Witherspoon's vocal. Jay McShann's "Confessin' the Blues" is a more jazzed-up arrangement, but Witherspoon's deep in the R&B groove here, taking a hint from Joe Turner. The finger-popping read of Turner's "It's a Low Down Dirty Shame" is in the gutbucket; the rhythm section swings hard. It's not as raucous as the original, but Witherspoon's smooth, clear, and deep register is beautifully complemented first by Wilson's solo and then by Webster's. The real stunner is near the end, when the band takes on Big Bill Broonzy's "Just a Dream," where Witherspoon wails and moans the blues. It's just chilling. This is one of those recordings that is a true hidden classic.

Side One:
1. I'd Rather Drink Muddy Water
2. I'm Gonna Move To The Outskirts Of Town
3. Key To The Highway
4. Did You Ever
5. Confessin' The Blues
6. Nobody Knows You When You're Down And Out