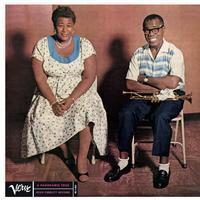 2013 Stereophile Magazine Record to Die For!

The most delightful jazz vocal recording of all time, now enshrined in 45rpm, 200gm vinyl from Analogue Productions, and it's a jaw-dropper. The piano sounds a little hooded, but Ella and Louis are 3D-palpable; they're in the room, or you're in their room. Ella breathes air; when Pops sings down low, your hair stands on end. A jazz-critic friend likened it to "an acid trip." It costs $50: a bargain at twice the price.- Stereophile Records to Die For

"If you're a jazz-following audiophile, go buy this right away. Flummoxed by the  price tag?

How much would you pay for the most palpable illusion you'll ever experience that Pops and the First Lady of Song are back among the living—standing, breathing, singing, and blowing, right in front of you? ... It's the only QRP Verve I've heard so far, but if it's a harbinger of things to come, it's what Satch would call a mitzvah!"Fred Kaplan, stereophile.

But like the reproduction of Phil Stern’s cover photo for the double 45, which looks like it was produced with great care, the sonics on this new Analogue Productions release are far superior. The backgrounds are jet black and the vocal textures take on a thrilling realism the 33 can't match. You can feel the touch of the musicians and hear their contribution far more clearly.  “Pops” leaves beads of sweat on the floor. Yours, not the studio’s. I swear. Or maybe the kitchen sink above my listening room only leaks when I play this record? Michael Fremmer Analogue Planet

"...these are all truly classic Verve titles that you simply don't want to miss...most importantly, the sound of these reissues is nothing short of astounding. Particularly the early Billie and Ella mono records are incredible treasures of sonic beauty. I'd definitely ask Santa for the whole set, or, if you want to cherry pick, the most classic titles. Whatever you decide, you owe yourself at least a half dozen!" Winner of a 2012 Positive Feedback Online Writers' Choice Award

The very fact that America's biggest jazz label called one of their albums quite simply Ella and Louis indicates that we are talking about something very special here. And surely enough has been said - "Satchmo" and the grande dame of jazz certainly need no further introduction. In the '50s just the mere mention of their forenames was enough to light up the eyes of jazz fans.

A glance at the tracklist reveals that tranquility rules the day: wild stomps and improvised scats will neither be sought nor missed. Of prime importance to the jazz ballad is a feeling of 'letting oneself drift' in the inspiration which gushes forth from the minds of genial American songwriters.

This is no contest - for the artists all pursue a common goal with extreme sensitiveness. The background combo, made up of first-class musicians and led by Oscar Peterson, performs with great concentration and almost obtrusive unobtrusiveness. Verve's highly successful producer Norman Granz decided quite deliberately to make the recording in the studio instead of at a live session. And success has verified his judgment, for such vocal jazz knows only gentle tones - but the result is all the more intensive for that.

Ella and Louis is an inspired collaboration, masterminded by producer Norman Granz. Both artists were riding high at this stage in their careers, and Granz assembled a stellar quartet of Oscar Peterson (piano), Buddy Rich (drums), Herb Ellis (guitar) and Ray Brown (bass). Equally inspired was the choice of material, with the gruffness of Armstrong's voice blending like magic with Fitzgerald's stunningly silky delivery. Outstanding are Irving Berlin's "Cheek to Cheek" and "Isn't This a Lovely Day," and everything else works like a dream, with the golden star going to the Gershwin brothers' "They Can't Take That Away from Me." Gentle and sincere, this is deserving of a place in every home.

• Cut from the Absolute Original Analog Master Tapes! Musicians:  Louis Armstrong, vocals, trumpet Ella Fitzgerald, vocals Ray Brown, bass Herb Ellis, guitar Oscar Peterson, piano Buddy Rich, drums Selections: 1. Can't We Be Friends 2. Isn't This A Lovely Day 3. Moonlight In Vermont 4. They Can't Take That Away From Me 5. Under A Blanket Of Blue 6. Tenderly 7. A Foggy Day 8. Stars Fell On Alabama 9. Cheek To Cheek 10. The Nearness Of You 11. April In Paris 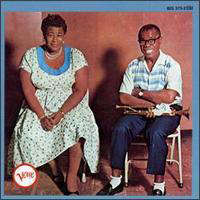