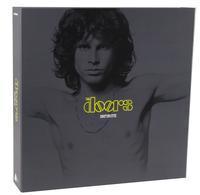 ...I thought it was impossible to improve on Bruce Botnick's neutral and detailed engineering on the original Elektra vinyl, but has more inner detail, deeper bass, more extended highs, wider dynamic range and more delicacy. Over the last 20 years, many record companies have claimed, largely erroneously, that their "audiophile" vinyl reissues of classic jazz, rock and classical music exceed the sound quality of the original LPs. Here, AP has actually done it, and by a wide margin." — Robert J. Reina, Stereophile

A 2014 Stereophile Record to Die For!

All remastered from the original sources by Doug Sax and The Doors original engineer Bruce Botnick.

Analogue Productions bring you The Doors — the band's six Morrison-era albums, all 45 RPM double LPs, in a box set. Box sets limited to 2,500 numbered copies each on 200-gram vinyl;

All packaged in a textured, fold-over box "The magnetic door front-opening box (there must be a tech-packaging name for it that I don't know) is beautifully and rugggedly manufactured inside and out. It features a gray cast covering containing a ghostly iconic image of Jim Morrison on the front  and the group on the back. The box also includes a full-sized full-color printed-on-heavy-stock booklet featuring album notes and a short interview conducted just before Jim Morrison's death by Ben Fong-Torres.

It also contains short production notes by Bruce Botnick ... The booklet's layout and graphic content are outstanding and include images of the master tapes and in the case of the first album the rare copy of the master used on that album for the box (the master tape was not useable). ..

. Like most everything coming from Analogue Productions of late, the packaging and presentation are 'world class.'" — Michael Fremer, Analog Planet,

As aptly put by rock ‘n' roll journalist extradorinare Ben Fong-Torres, there's never been a reissue of The Doors recordings that sounded quite like these gems from Analogue Productions . And now, you can ‘break on through' with all six Doors' studio albums in a deluxe box set — on 45 RPM LP

Analogue Productions, taking the original master analog sources, has cut every track from every studio album at 45 RPM, resulting in extended high frequencies, lower noise and, as Fong-Torres notes: "Bottom line, a chronicle of The Doors in the studio, captured with the highest sonic quality possible. "They deserve no less.

" All of The Doors' legendary albums — The untoppable self-titled 1967 debut The Doors, one of rock's most important debuts,

Strange Days, Waiting For The Sun, The Soft Parade, Morrison Hotel, and the visceral L.A. Woman —

have been remastered by Doug Sax and The Doors' original engineer Bruce Botnick, and the LPs pressed on 200-gram vinyl at  Quality Record Pressings plant (fast gaining popular consensus as the best pressing plant in the world). But this special Doors' reissue features more than just spectacular sonics. We've included a 12-inch specially illustrated booklet with 19 photographs and a 2,700-word essay about the band from Ben Fong-Torres. Fong-Torres, a former editor for Rolling Stone, got the last interview with lead singer Jim Morrison before Morrison's departure in Paris in the spring of 1971, never to return. Portions of that last interview with "lead lizard" Morrison also appear in the included booklet.

All of this comes packaged in a textured fold-over box. Both the box and the booklet will also be sold individually so that those who have already purchased individual albums in our 45 RPM Doors reissue series can assemble the set themselves at home. Fong-Torres helped compile one of the most definitive written histories of the band — "The Doors by The Doors." In that book, Chester Bennington (Linkin Park) calls The Doors, "the most underrated musical powerhouse in rock history. And unlike some that fade away into the abyss, The Doors will always relate to the youth of any era." Girl you gotta love your man. And audiophiles, you'll love The Doors box set  The memory of Morrison and co. on you depends; their legacy will never end.

Get this box set today before they're gone; into your house The Doors will storm ... Yeah! Technical notes about the recording process by Doors producer/engineer Bruce Botnick: "Throughout the record history of the Doors, the goal between Paul Rothchild and myself was to be invisible, as the Doors were the songwriters and performers. Our duty was to capture them in the recorded medium without bringing attention to ourselves. Of course, the Doors were very successful, and Paul and I did receive some acclaim, which we did appreciate. "If you listen to all the Doors albums, no attempt was made to create sounds that weren't generated by the Doors, except for the Moog Synthesizer on Strange Days, although that was played live in the mix by Jim, but that's another story. The equipment used was very basic, mostly tube consoles and microphones. Telefunken U47, Sony C37A, Shure 56. The echo used was from real acoustic echo chambers and EMT plate reverb units. In those days, we didn't have plug-ins or anything beyond an analogue eight-track machine. All the studios that we used, except for Elektra West, had three Altec Lansing 604E loudspeakers, as that was the standard in the industry, three-track. On EKS-74007, The Doors, we used four-track Ampex recorders and on the subsequent albums, 3M 56 eight-tracks. Dolby noise reduction units were used on two albums, Waiting For The Sun and The Soft Parade. Everything was analogue, digital was just a word. We didn't use fuzz tone or other units like that but created the sounds organically, i.e. the massive dual guitar solo on "When The Music's Over," which was created by feeding the output of one microphone preamp into another and adjusting the level to create the distortion. The tubes were glowing and lit up the control room.

"When mastering for the 45-RPM vinyl release, we were successfully able to bake the original master tapes and play them to cut the lacquer masters." - Bruce Botnick, July 2012 "I received test pressings today for both Morrison Hotel and L.A. Woman. I have to tell you that these are the very best pressings I've heard in many, many moons. Great plating and your compound is so quiet that I clearly heard every fade out to its conclusion with no problem. Doug (Sax) and company did a lovely job, the tapes sound pretty damn good for being almost 50 years old and his system is clearly the best...You should be very proud of what you and your troops are doing." - Bruce Botnick, The Doors producer/engineer

The best materials can be found in this edition, superb printing of every gatefold, every page, the package is something really special; now with the sound, you can tell the work done for this edition when you hear the rain fall in "Raiders on the storm", the channel separation in every track, the clean sound but at the same time feel the sound alive, flowing with the wind, feeling every note, every riff, every scream, The Doors are indeed infinite, but for me, this edition is definitive. Astonishing quality!

I realized that Analog Productions were a force to be reckoned with. That box was the best sounding vinyl in my collection; until now. The Doors Infinite box is now the high water mark for quality. I've been listening to these songs since they were released, and this is the first time I feel that I'm hearing them as they were intended. The mastering is truly astonishing. The sound is transparent, open, and three dimensional. The pressings are the quietest I've ever experienced. The packaging is of the highest quality, and the box is beautifully designed. If you're still unsure if this release is worth the money, I'm here to assure you that it is. The love, care, and attention that was put into this collection is worth every cent. This is a must own for vinyl lovers the world over. Now if these folks could please give The Beatles catalog this same treatment I could die a happy soul. Thank you Analog Productions, well done. 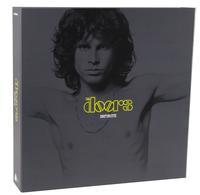 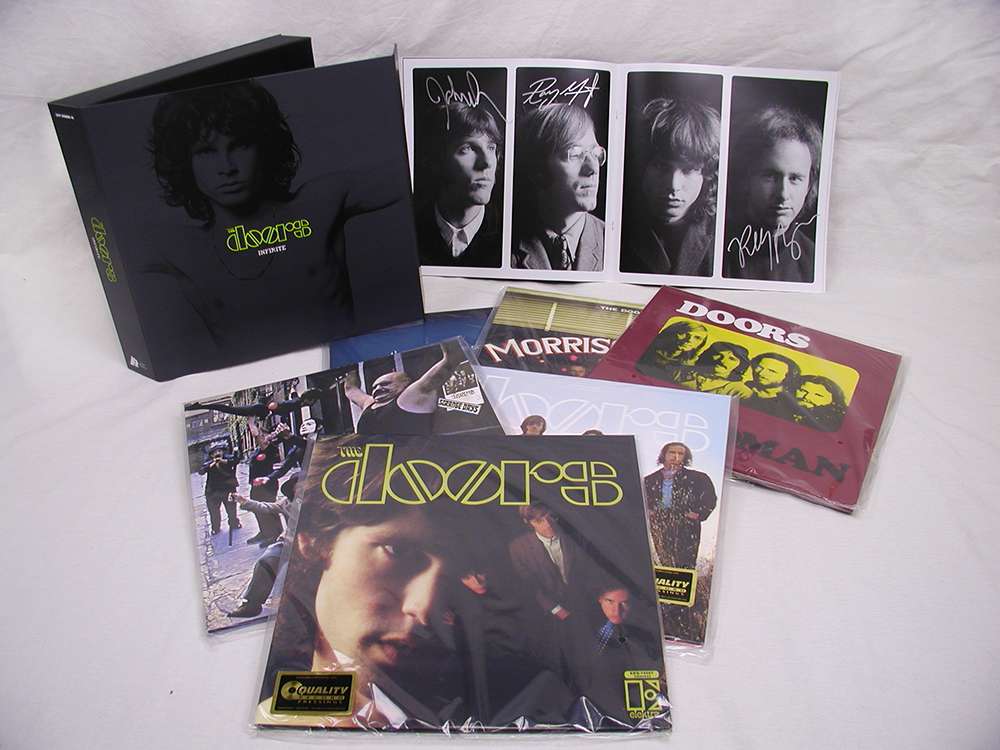